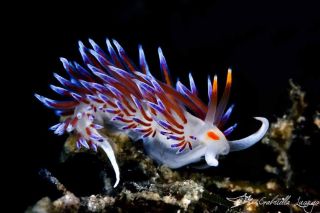 The nudibranch Cratena peregrina gets a double meal by feasting on prey that recently fed on plankton.
(Image: © Gabriella Luongo)

A type of brightly colored sea slug has a taste for microscopic marine creatures called zooplankton, and it feeds on them using a method that's never been seen before: It captures quantities in a gulp by using a middleman.

The sea slug's unsuspecting helpers are hydroid polyps — tiny, coral-like animals that live in colonies and gorge on zooplankton. And the sea slug, known as a nudibranch, treats the polyps as living fishing nets, avidly scooping them up and swallowing them down as soon as the hapless hydroids finish their zooplankton supper.

Some animals, such as hyenas, are known for a behavior called kleptoparasitism, in which they wait until an animal kills its prey and then drive the predator away to claim its meal. However, this nudibranch behavior — stealing the predator's feast by swallowing the predator and prey together — is something that was previously unknown, and researchers dubbed it "kleptopredation" in a new study. [Gallery: Jaw-Dropping Images of Life Under the Sea]

The nudibranch Cratena peregrina is a common type of bottom-dwelling marine mollusk found in the Mediterranean and the Atlantic coastal waters near the Iberian Peninsula, Senegal and the Canary Islands. It measures about 1 to 2 inches (3 to 5 centimeters) in length, and has a pale body covered with colorful, elongated, fleshy spines called cerata, which help with respiration by increasing the surface area on the upper part of the animal's body.

C. peregrina was previously known to feed on hydroid polyps, but the study authors discovered that the nudibranchs preferred polyps that had just eaten. In experiments, when presented with a colony of polyps that had just fed and a colony that was "empty," the sea slugs ate twice as many of the polyps that were full of zooplankton.

In fact, kleptopredation provides the nudibranchs with enough plankton to account for about half of their diet, overturning previous claims that polyps were the nudibranchs' primary food source, according to the study.

Their findings hint that nudibranchs may not be the only marine creatures to use this previously unknown strategy, and that predator-prey interactions in this group may be more complex than once thought, the researchers wrote.

"This may be widespread among other invertebrate specialists, altering our understanding of the functional roles of suspension feeders," the study authors reported online today (Nov. 1) in the journal Biology Letters.