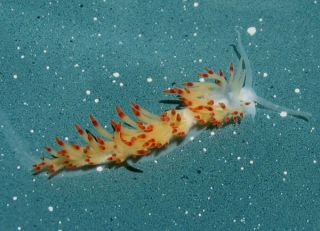 A new species of sea slug, discovered in the tide pools of Carpinteria Reef in California, has just been named for its discoverer.

Jeff Goddard, project scientist with the Marine Science Institute at the University of California, Santa Barbara was working in the tide pools in 2008 when he discovered the nudibranch, a type of sea slug known for its bright colors.

Recognizing it as a never-before-seen species, Goddard documented the living specimen before preserving it and sending it off to Terrence Gosliner, an authority on the taxonomy of sea slugs at the California Academy of Sciences in San Francisco.

Goddard kept the slug in his lab for a few days, until it laid an egg mass, so he was also able to observe its early development and hatching larvae.

"The shallow-water nudibranch fauna of Southern California especially is well known, so it was pretty exciting to find a new species right under our noses here in Santa Barbara County," Goddard said. "Only one specimen was found, so now we need to find out where more are hiding, what they feed on, and whom they interact with."

For the scientific record, Goddard describes the new species as "characterized externally by its smooth rhinophores [a pair of club-shaped structures which are part of the head]; long tail and cephalic tentacles; pointed foot corners; red and orange tipped cerata [spiny growths on the body which help increase surface area for respiration]; and lack of pigmentation on the head, body and head tentacles."

The sea slug measures about 1.2 inches (3 centimeters) long when stretched out and crawling.

Though the sea slug was discovered in 2008, , it took a couple of years for documentation, comparison with known species, and publication to officially announce its discovery, as is the case with many taxonomic discoveries.

Gosliner named the new sea slug after Goddard the species name is Flabellina goddardi when he described it in the Sept. 15 online edition of the journal Proceedings of the California Academy of Sciences.

Goddard and his colleagues will continue searching for more specimens of the newly described species.