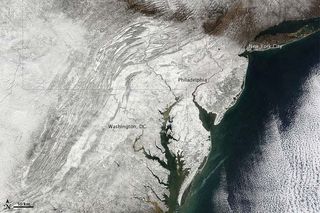 The results of the weekend storm that buried many Eastern U.S. locations in 2 feet or more of snow stands out starkly in a new satellite image.

The image from space reveals how the storm swept through Washington, D.C. and Philadelphia but largely spared New York City. The landscape is largely snow-free just north of Manhattan.

Nicknamed "snowpocalypse" and "snowmageddon," the blizzard dumped a record-breaking 32 inches at Dulles International Airport in the nation's capital, according to news reports.