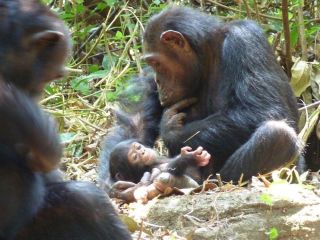 Moments after a wild chimpanzee was born, an adult chimp snatched the infant away from its mother and cannibalized it, according to a new study that is the first to document this macabre behavior.

This new finding, along with additional prior work, suggests that female chimpanzees might often go and hide on "maternity leave" before delivery to avoid such infant mortality, researchers said.

Scientists made this gruesome discovery while following a party of 21 chimps in the Mahale Mountains on the eastern shore of Lake Tanganyika in western Tanzania. In 2014, the scientists were lucky enough to see a chimp give birth in the wild, a very rare event for researchers. [Animal Moms Have It Tough! 8 Extreme Creature Births]

Only seconds after the infant's mother, Devota, gave birth in front of the other chimps, another chimp, named Darwin — the second or third highest-ranked male in the group at the time — snatched the newborn and ran into the bush during heavy rain. Devota did not even have the chance to touch her child, the scientists noted.

The scientists followed Darwin the next day. However, the adult chimp had severe diarrhea, and the researchers could not locate any bones or hairs of the victim in Darwin's excrement.

Previous research has seen many cases of infanticide by males among primates. One possible explanation is that the practice prompts females to resume mating, increasing the chance that infant-killing males might sire subsequent infants.

Until now, scientists had never seen infanticide immediately after delivery among wild chimps. Prior work had suggested that the reason researchers had only very rarely seen chimps deliver in the wild was that expectant mothers went on "maternity leave," wherein they usually hid themselves and gave birth alone.

"'Maternity leave' in wild chimpanzees may work as a counterstrategy against the risk of infanticide soon after birth," study lead author Hitonaru Nishie, a primatologist at Kyoto University in Japan, told Live Science.

The 2014 case of infanticide may have been Devota's first delivery; — the scientists had not seen Devota give birth before this incident of cannibalism. Her inexperience might explain why she did not go on maternity leave, the researchers said.

To see if expecting-mother chimps usually went on maternity leave, the scientists analyzed how often they saw pregnant and non-pregnant female chimps from 1990 to 2010. The researchers found that expecting mothers were usually not seen for about seven to 18 days before they gave birth.

The researchers did note that Devota successfully gave birth to a female infant in 2016. In that case, "Devota went on maternity leave for about one month," Nishie said.

Future research will investigate how female chimps learn how to go on maternity leave, how they learn when to leave and what they do during their leave, Nishie said.

Nishie and colleague Michio Nakamura at Kyoto University detailed their findings online Oct. 6 in the American Journal of Physical Anthropology.