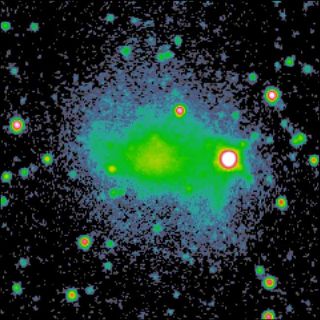 An astronomer at Lowell Observatory studies how stars form in tiny, "dwarf" galaxies, which may provide insight into the birth of the first starts after the Big Bang. Here, a color-enhanced optical image of the galaxy DDO 87 in the constellation Ursa Major that shows the stars.
(Image: © Lowell Observatory.)

When you picture a galaxy in your mind's eye, it's often a spiral with magnificent structure — long, swirling, milky-white arms of stars and gas.

Lowell Observatory astronomer Deidre Hunter has spent most the last 17 years methodically studying unfamiliar galaxies that you might not expect — small, diffuse galaxies: the dwarf irregulars — to learn all she can about star formation and what it can tell her and her colleagues about the birth of the first stars after the Big Bang.

In an NSF-funded project called LITTLE THINGS — for Local Irregulars That Trace Luminosity Extremes (LITTLE) and The HI Nearby Galaxy Survey (THINGS) — Hunter's team is mapping the gasses in these diffuse, enigmatic galaxies to discern the many processes of star formation.

"Star formation in dwarfs today is similar to star formation right after the Big Bang," Hunter said. "Stars form out of clouds of gas. Our quest is to figure out what the molecular clouds in these irregular galaxies are, and the processes that form stars."

The LITTLE THINGS team is closely studying 41 dwarf-irregular galaxies through the lens of numerous data sets. And the galaxies are small, relatively speaking. One, DDO 75, has 1/3500 the mass of the Milky Way. Another, Leo T, was recently discovered in the Local Group of galaxies, the closest neighbors to our own Milky Way.

The process of star formation is very inefficient. Some 50 to 90 percent of the gas present in star-forming molecular clouds, including the gas in the tiny irregular galaxies, remains after stars form.

"This produces the nebulae," Hunter said. "They are like signposts that say, 'massive stars are found here.' In a general sense it's like weather clouds on Earth. You need these molecular clouds that form out of the ubiquitous atomic hydrogen gas to precipitate stars."

Hunter added that there are probably multiple processes going on, which adds to the complexity and time-intensive nature of the LITTLE THINGS study. In the dwarf galaxies, there's star-induced star formation. There's also turbulence. "It's not just density, but also the motions of the gas," Hunter says.

The data sets Hunter and her colleagues are using include optical-wavelength data Hunter already collected and analyzed using research telescopes at Lowell’s Anderson Mesa facility near Flagstaff. But some of the new, key data is in radio wavelengths, and they come from NSF's Very Large Array (VLA) located west of Socorro, New Mexico.

In May of 2007, Hunter was invited to give a talk at the VLA. Afterwards, a scientist with the facility suggested she put in a large proposal, that is, a proposal for a large amount of VLA telescope time. She and her team had been unsuccessful in previous smaller requests for the needed hours, but this time, the team was rewarded: about 400 hours to study a subsample of dwarf galaxies that represent a range of characteristics.

One of Hunter's collaborators, Lowell predoctoral student Megan Jackson, is looking at the motions of the stars, their velocities, and their rotation. Fellow Lowell predoc Hongxin Zhang is looking closely at existing ultraviolet and optical data sets from the galaxies, helping define their star-formation histories.

Zhang has been limited with his current sets of infrared data, so he is embarking on an observing program using a special instrument called Mimir attached to the 1.8-meter Perkins Telescope at Anderson Mesa, also at Lowell.  The Perkins is operated through a partnership with Boston University, and Mimir is a powerful, $2.5-millon infrared instrument built by a team led by Dan Clemens of Boston University.

As for the massive amount of VLA radio data, much has to be collected, sorted, and analyzed.  Kim Herrmann, a Lowell Observatory postdoctoral fellow, is part of the LITTLE THINGS team and she is reducing the VLA data.

"When Kim came to Flagstaff, she had never dealt with radio interferometric data," Hunter said.  "But she quickly came up to speed and has now become a local expert. She has calibrated more LITTLE THINGS data than any other person on the team, and she is exactly the kind of person we need on the team. Right now, we're in this grunge phase of the project; it is very tedious. If all goes well, and I'm not distracted by other tasks, it takes me one month per galaxy to reduce the VLA data."

The extensive data are poised to re-shape astronomers' understanding of star formation. "The crux of the problem is that the standard models for galaxies don't work for dwarfs. Dwarfs should not be forming stars at all."

But indeed they are. They are forming stars even at their outer edges. The little-understood portions of dwarf irregular galaxies are what intrigue Hunter most of all.

"It's the outer disks — because they are so extreme," she said. "These are such extreme environments that they are very stringent tests for star formation."

Editor's Note: This research was supported by the National Science Foundation (NS), the federal agency charged with funding basic research and education across all fields of science and engineering. Any opinions, findings, and conclusions or recommendations expressed in this material are those of the author and do not necessarily reflect the views of the National Science Foundation. See the Behind the Scenes Archive.