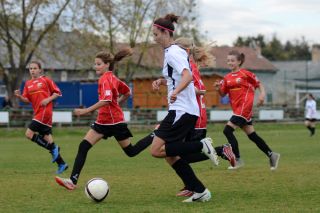 If you've ever had a concussion, you may have heard that you should take it easy for two weeks or so before easing back into your regular activities. But new research suggests that two weeks may not be sufficient, especially for teenage girls.

The general understanding of how to best manage a concussion largely stems from studies conducted mostly in adult men, many of whom were professional or elite athletes. But women, and in particular, adolescent girls, may need to manage concussions differently, a new study finds.

In fact, girls of middle and high school age can take more than twice as long to recover from a concussion as boys of the same age, according to the study, published today (Oct. 2) in the Journal of the American Osteopathic Association.

The median duration of symptoms was 11 days for boys and 28 days for girls, the researchers found. This means that the recommendation that athletes stay out of action for about two weeks after the injury would cover boys, while girls wouldn't have reached even the halfway point in their recovery.

The findings "confirm what many in sports medicine have believed for some time," lead study author Dr. John Neidecker, a sports-related concussion specialist at Orthopaedic Specialists of North Carolina, said in a statement.

Part of the difference between boys' and girls' recovery times might be explained by biological differences between their brains that aren't particularly well-understood, Neidecker told Live Science.

Underlying medical conditions could also play a role. Conditions such as depression, anxiety or migraines could cause concussion-like difficulties with focus, attention, balance or pain, and a concussion should aggravate or exacerbate these symptoms.

"Most of these conditions are more [common] in females than males," Neidecker said. The longer duration of symptoms observed in adolescent girls after concussions could therefore be the result of an "aggravated pre-existing condition," he said.

In April, top concussion researchers from around the world released a consensus statement from the 5th International Conference on Concussion in Sport on how to study, prevent, manage and treat concussions. The statement noted that earlier research showed that concussions can exacerbate other conditions, including depression, anxiety, headaches and stress.

Neidecker agreed that stress can also play a role. "This is a stressful injury," he said. "It's stressful being an adolescent, and stress in itself can bring in concussion symptoms — irritability, difficulty sleeping [and] difficulty concentrating. It's hard to tell what's from stress and what's from the injury."

To better treat concussions in adolescent girls, it's crucial for doctors to find out what pre-existing conditions patients may have, Neidecker said. Knowing if a patient also has depression or migraines, for example, can help a doctor recommend more-appropriate treatments sooner, which can help bring the gap in recovery time between the genders down, Neidecker said.

The problem is that many adolescents may not know if they have migraines, for example, and instead assume that their headaches are normal, Neidecker said. In these cases, doctors need to get creative to tease the information out, he said.

The researchers noted that the study had limitations. For example, the patients included in the study self-reported their symptoms, which may have introduced inaccuracies. In addition, the research was conducted at a medical practice in New Jersey that focused on sports-related concussions, and this specialization means that the doctors may have been treating more-severe cases than those that occur in the general population, the researchers said.