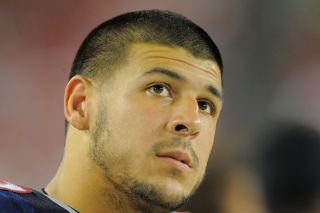 Aaron Hernandez during the Patriots game against the Tampa Bay Buccaneers at Raymond James Stadium.
(Image: © Scott A. Miller/Zuma)

Former NFL player Aaron Hernandez had a severe form of the brain disease chronic traumatic encephalopathy (CTE) when he died earlier this year, a new analysis of his brain shows.

Researchers at Boston University's CTE Center, who studied Hernandez's brain, said on Thursday (Sept. 21), that the former New England Patriots player had "Stage 3 out of 4" CTE, with stage 4 being the most severe. The damage seen in Hernandez's brain was particularly severe for someone his age — at 27, Hernandez showed the type of damage that is typically seen in pro-football players in their 60s, according to the New York Times.

It was "the most severe case they had ever seen in someone of Aaron's age," Jose Baez, a lawyer for the Hernandez family, said at a press conference announcing the findings.

Hernandez committed suicide on April 19, while serving a life sentence in prison for murder.

CTE is a degenerative brain disease found in people with a history of repeated blows to the head, including pro-football players and boxers, according to the CTE Center. It is thought that repeated hits to the head cause damage to brain tissue, leading to a buildup of an abnormal protein called tau. The characteristic brain changes of CTE can begin months, years or decades after the last head injury or the end of a person's athletic career, the CTE Center said. So far, the center has identified CTE in more than 100 former NFL football players.

The condition can cause symptoms such as memory loss, impaired judgment, impulse-control problems, aggression, depression, anxiety and suicidality, the CTE center said. Several other former NFL players who committed suicide, including Adrian Robinson, Dave Duerson and Junior Seau, were later found to have CTE.

Currently, the condition can be diagnosed only after death.

Hernandez's family is suing the NFL and the Patriots on behalf of his 4-year-old daughter, Avielle, seeking unspecified damages for the loss of her father, according to Reuters.