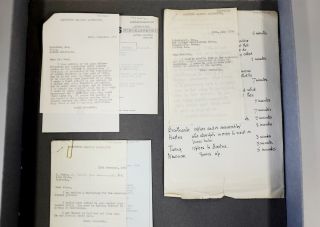 A batch of previously unknown letters from the famous code-breaker and computer scientist Alan Turing has been discovered in England.

The papers had been sitting in an orange folder in the back of a filing cabinet—unnoticed for at least three decades —in a storeroom at the University of Manchester, where Turing worked after World War II.

"When I first found it, I initially thought, 'That can't be what I think it is,'" Jim Miles, a professor of computer engineering at the University of Manchester, said in a statement. "But a quick inspection showed [that] it was a file of old letters and correspondence by Alan Turing. I was astonished such a thing had remained hidden out of sight for so long." [Super-Intelligent Machines: 7 Robotic Futures]

Miles stumbled upon the letters in May, and they are now available at the University of Manchester's archives.

There are 148 documents in total, dating from early 1949 until the month of Turing's tragic death in June 1954. Turing had been convicted of "gross indecency" in the United Kingdom in 1952 for having sex with another man. The computer scientist was forced to undergo chemical castration, and committed suicide at age 41. Turing was pardoned by Queen Elizabeth II in 2013.

The papers don't contain any major revelations about Turing. Most offer a window into his everyday life as an academic.

There is a draft of a BBC radio program about artificial intelligence. (Turing famously came up with a test, now known as the Turing test, to determine whether a machine is capable of thinking.) There is a letter to the editor of The Mathematical Gazette journal, in which Turing offers to review Norbert Wiener's seminal 1948 text"Cybernetics: Or Control and Communication in the Animal and the Machine." In another correspondence, from 1953, Turing makes dinner plans ahead of a talk called "Fir cones and Fibonacci numbers" at theCambridge University Mathematical Society. (Late in his career, Turing was fascinated by the mathematical patterns found in nature.)

Though there are no personal letters in this new collection, one letter does offers a candid opinion on the United States. In the document, from 1953, Turing explains to a colleague why he won't be attending a cybernetics conference in New York: "I would not like the journey, and I detest America."

Turing, who developed a machine that helped break the German Enigma code during World War II, spent time in the United States in the 1930s and 1940s and was unimpressed, previous letters indicate. "I am persuaded that one cannot very well trust these people where a matter of judgment in cryptography is concerned,"Turing wrote in one previously known letter after meeting American code-breakers.

The newly discovered letters "mostly confirm what is already known about Turing's work at Manchester, but they do add an extra dimension to our understanding of the man himself and his research," James Peters, an archivist at the University of Manchester, said in a statement. "As there is so little actual archive on this period of his life, this is a very important find in that context. There really is nothing else like it."