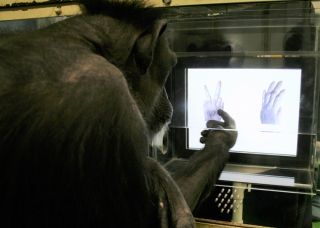 Chimpanzees can learn how to play the game rock-paper-scissors about as well as a 4-year-old human child, a new study finds.

This finding suggests that the last common ancestor of humans and chimps may have possessed the capability for the complex form of thinking used in the game, scientists said.

In the popular children's game rock-paper-scissors, the hand signal for "paper" always beats the sign for "rock," while "rock" trumps "scissors," and "scissors" defeats "paper." The ability to learn such circular relationships might prove key to solving complex problems or forming complex networks of social relationships, the researchers said. [8 Human-Like Behaviors of Primates]

"In the wild, with many, many animals, you can see dominance ordered by rank — 1, 2, 3, 4, 5, 6, 7 and so on. This is fairly typical in chimps," said study senior author Tetsuro Matsuzawa, a primatologist and comparative cognitive scientist at Kyoto University's Primate Research Institute in Japan. "However, in human societies, you can have more complex societies, where you can have a circular relationship, with 1 dominant to 2, and 2 to 3, but 3 can be dominant to one. So, there is a question — how did this kind of circular relationship evolve in humans?"

To help solve this mystery, the scientists experimented with seven chimpanzees of different ages and sexes. The apes sat in a booth housing a computer touch screen and were presented with two different options for hand signals used in rock-paper-scissors. If they picked the stronger option, they were given a piece of apple and heard a chime; if they picked the weaker option, an error buzzer sounded, and they received nothing.

Once the chimpanzees learned how all the pairs worked, the scientists displayed a random mix of all three pairs for the apes. After an average of 307 sessions playing the game, with three 12- to 15-minute sessions a day, five of the seven chimps showed they had mastered the game, picking the winning choice at least 90 percent of the time. The smartest of the chimps mastered the game after only 53 days, according to the study.

The other two chimps performed nearly as well, though shy of 90 percent, Matsuzawa noted. "Not all chimpanzees can perform perfectly, just like not all human children behave perfectly," Matsuzawa told Live Science.

The scientists also taught rock-paper-scissors to 38 children ages 3 to 6 to compare the learning processes of chimps and humans. The children had little difficulty grasping the game, learning it within an average of five sessions, but how well they performed depended on age — the older the children were, the more accurate they were when presented with a random mix of all three pairs, the scientists found. Chimpanzee performance was close to that of 4-year-old children, Matsuzawa said.

"We've proved that chimpanzees have the intellectual capability to learn circular relationships, and of course humans have this capability. So the logical conclusion is that the last common ancestor that humans and chimpanzees had about 6 million years ago may also have had this kind of capability," Matsuzawa said.

In the future, the researchers want to see how well their chimps in Japan perform at the game against humans, or against chimps in the United States. "We can see what strategies the chimps develop," Matsuzawa said.

The scientists detailed their findings online Aug. 10 in the journal Primates.