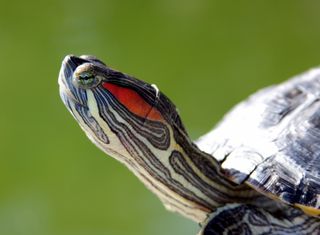 Red-eared sliders (Trachemys scripta elegans), which sport a red stripe around their ears, can grow so big they need a 100-gallon tank, or even a pond, to live in.
(Image: © blewulis/Shutterstock)

The aptly-name red-eared slider is an easily recognizable semiaquatic turtle that's popular in the global pet trade. These animals are considered one of the top invasive species of the world, and it's really no wonder when you consider their mating habits.

Red-eared sliders (Trachemys scripta elegans), which have a red stripe around their ears and are known to quickly "slide" off objects into the water, are native to the southern United States and northern Mexico. But thanks to the global pet trade industry, they're the most widespread turtle species, having been introduced to dozens of countries, said Greg Pauly, a herpetologist at the Natural History Museum of Los Angeles County.

Though the reptiles are desired as pets for their initial small size and low maintenance, some pet owners face a rude awakening: The turtles get bigger. "The turtle may have only required a 2-gallon tank when you bought it, but after a few years it needs a 100-gallon tank or a backyard pond," Pauly told Live Science. "They're also kind of messy and kind of stinky. So, after a few years [of growth], they become a big commitment." [In Photos: The World's Freakiest Looking Animals]

Some owners take the easy way out by releasing their red-eared sliders into the wild, helping the turtles spread to the urban ponds, streams and reservoirs of every continent save for Antarctica.

In these habitats, male red-eared sliders will engage in courtship behaviors as long as it's warm enough for them to swim around. "They are pretty single-minded in focus," Pauly said, adding that the age at which the animals begin mating depends on their location. In the warmest of climates, males may reach sexual maturity at 2 year old and females 3 to 4 years old; the animals become sexually active a few years later when in colder climates.

Compared with females, male red-eared sliders have extra-long claws on their forefeet. But rather than use these claws as weapons, "Nightmare on Elm Street" style, males use their claws more like jazz hands to woo females.

When a male finds a female, he will swim up close to her, bring his forelimbs forward, and wave or rapidly vibrate his claws in front of her face. He may also use his claws to "tickle" the female's face, Pauly said.

If the female is uninterested, she'll try to avoid the male and swim around him or past him. But often, she won't get very far without running into another male. "The females are harassed constantly by all these males that are courting them," Pauly said.

Sometimes, the female will decide she's had enough and will pull her head down into her shell. But males, especially the older ones, don't always take "no" for an answer and may bite at the large fold of skin around the female's skin that's still sticking out, possibly wounding her.

It's not clear how females choose mates, if they have any choice at all.

But if the female is receptive, she'll allow the male to climb onto her back while the pair are still in the water. The male will use his forelimbs to hold onto her shell and his backlimbs to brace himself as his tries to position his cloaca (waste and reproductive orifice) as close to hers as possible.

Male red-eared sliders, like other turtles, have a large penis to body size ratio. During mating, the cloaca everts and engorges through hydrostatic pressure to become a penis that's 30 to 40 percent of the length of the turtle's body. Unlike the mammalian penis, which has a tube to transfer sperm, the turtle's penis has a channel-like groove that the sperm moves down.

Much of the male's exceedingly long penis goes into the female during copulation, which lasts up to 15 minutes.

After mating, females may store the male's sperm for an extended period of time before deciding to use it to fertilize her eggs. In fact, she could mate again and use the sperm of multiple males for a single clutch.

"For turtles, red-eared sliders are surprisingly prolific," Pauly said. That is, a female will lay up to 30 eggs in a terrestrial nest. And if the conditions are right, she may lay up to five or six clutches in a single year.