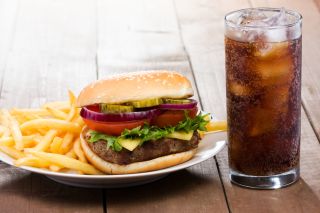 Washing down your bacon cheeseburger with a big, cold soda may trigger the body to store more fat than it would if you drank something without sugar, a new small study finds.

When the people in the study added a sugary drink to a protein-rich meal, their bodies’ fat-burning ability decreased by 8 percent on average, the researchers found. In addition, the sugary drinks also appeared to increase their food cravings after the meal.

"We were surprised by the impact that the sugar-sweetened drinks had on metabolism when they were paired with higher-protein meals," lead study author Shanon Casperson, a research biologist at the U.S.  Department of Agriculture's Agricultural Research Service, said in a statement. [11 Ways Processed Food is Different from Real Food]

Indeed, earlier research has shown that people who increase their protein intake experience changes  both in how food is processed by their body and in how much they eat, according to the study, published July 20 in the journal BMC Nutrition. For example, research suggests that a higher protein intake is linked to an increase in the body's fat-burning abilities.

The new findings suggest that adding sugary drinks to a high-protein intake may have the opposite effect: The sugar-rich beverages may slow the body's burning of fat, according to the study.

For the study, the researchers recruited 27 healthy young adults, gave them special meals and then observed them in special isolated rooms called "room calorimeters."  The rooms had a bed, a toilet, a sink and some other furniture, and equipment to measure the levels of oxygen and carbon dioxide along with temperature and air pressure. These measurements allowed the researchers to calculate how the foods the participants ate affected their metabolism, including how many calories they burned and how they broke down fat, protein and carbohydrates.

The participants spent two 24-hour periods in the rooms. Each period started at 4 p.m., and each participant had dinner at 5 p.m. in the chamber. The participants then fasted until breakfast the next morning. [8 Reasons Our Waistlines Are Expanding]

Then, the experiment really began. During one stay in the room, the participants were served breakfast and lunch meals that each contained 15 percent protein. Each meal was served with a sweet drink that contained either sugar or an artificial sweetener. If the drink with sugar was served at breakfast, the participant received the artificially sweetened drink at lunch, and vice versa. This allowed the researchers to see if there was any difference between how the meal was metabolized when it was combined with sugar, versus without sugar.

After both breakfast and lunch, the participants were observed for 4 hours. During this time, the researchers could see how the body responded to the meal with either a sugary drink or an artificially sweetened drink.

During their other stay in the room, the participants were served breakfast and lunch meals that each contained 30 percent protein.

In other words, sugary drinks seem to decrease the body's fat burning and don't contribute to feeling fuller. The findings "provide further insight into the potential role of sugar-sweetened drinks — the largest single source of sugar in the American diet — in weight gain and obesity," Casperson said.

More research including more people over a longer period is needed to confirm the findings.