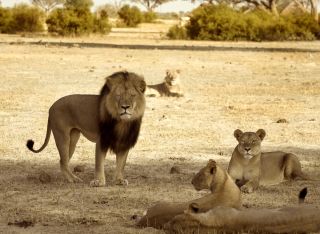 Cecil the iconic lion and his pride in Hwange National Park in November 2012. Cecil's son, Xanda, was shot and killed on July 7, 2017.
(Image: © paula french/Shutterstock)

The 6-year-old son of Cecil the Lion was shot and killed on July 7 just outside Hwange National Park in Zimbabwe, meeting the same end his father did in 2015, according to news reports.

The young lion, Xanda, was the pride male of a group that included two lionesses and several cubs.

"Xanda was one of these gorgeous Kalahari lions, with a big mane, big body, beautiful condition — a very, very lovely animal," Andrew Loveridge, a researcher at the University of Oxford who fitted Xanda with a GPS tracking collar last October, told The Guardian. "Personally, I think it is sad that anyone wants to shoot a lion, but there are people who will pay money to do that." [5 Ways Cecil the Lion Helped Scientists Understand Big Cats]

A private hunter in Zimbabwe reportedly led the hunt that brought down Xanda, though his clients' identities are not known, according to a statement by Lions of Hwange National Park

There are some 550 lions living in Hwange National Park, which stretches over 5,800 square miles (15,000 square kilometers), so the death of Xanda should not directly harm that population, Loveridge told The Guardian.

Even so, according to the Humane Society International (HSI), which issued a statement on July 20 condemning the killing, actions like trophy hunting are threatening lion. "Poachers and trophy hunters are driving lions to extinction. Fewer than 30,000 African lions — and possibly as few as 20,000 — are estimated to remain today," Masha Kalinina, international trade policy specialist for HSI, said in the statement. "Lions exist in 8 percent of their former range and are suffering from loss of habitat and prey in addition to poorly regulated trophy hunting."

Public outcry after an American dentist named Walter Palmer shot and killed Xanda's 13-year-old father, Cecil, in summer 2015, seemed to bring attention to controversial sport hunting. Palmer, who hired professional guides, paid $54,000 in hunting permits for the trip. Apparently, he and his guides lured Cecil just outside the park (where lions are protected) with a dead carcass, and then Palmer shot the male lion with a crossbow. The lion didn't die immediately, and according to a statement from the African Wildlife Foundation, Palmer tracked Cecil for about 40 hours before lethally shooting the lion with a gun.

Trophy-hunting fees can help fund wildlife conservation, if the hunted animals are not considered threatened and if the government or another permit-granting organization is transparent about how the money is spent on conservation, Kathleen Garrigan, a spokeswoman for the African Wildlife Foundation, previously told Live Science. (The foundation is a nonprofit group in Kenya that promotes the protection and conservation of African wildlife.)

Though Namibia is known to be relatively transparent about how those funds are spent, Zimbabwe and Tanzania are less forthright, according to Garrigan.

Xanda had fathered several cubs before his death; his deceased dad, Cecil, was thought to have been survived by 13 sons and daughters and 15 "grandcubs," according to The Guardian.

In May, two lionesses were reportedly lured outside Hwange National Park with cow meat before being shot and killed, according to a statement by the Conservation Action Trust.

Editor's Note: This article was updated to include a comment from the Human Society International.