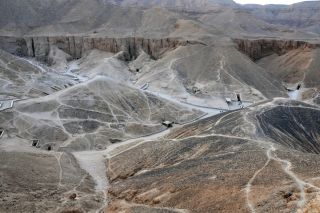 This shot of the Valley of the Kings shows the tomb entrances at Thebes in Egypt.
(Image: © mountainpix/Shutterstock)

Famed archaeologist Zahi Hawass and his team say they've found evidence of a tomb that could belong to King Tut's wife.

The archaeologists eventually plan to excavate the new tomb, which is located near the tomb of the pharaoh Ay (1327-1323 B.C.) in Egypt's Valley of the Kings, Hawass told Live Science.

"We are sure there is a tomb there, but we do not know for sure to whom it belongs," Hawass told Live Science in an email. On July 7, National Geographic Italia published an article in Italian suggesting that a team led by Hawass had found a new tomb in the Valley of the Kings, and Hawass confirmed that discovery to Live Science. [See Photos of Egypt's Valley of the Kings]

"We are sure there is a tomb hidden in that area because I found four foundation deposits," Hawass said, explaining that the foundations are "caches or holes in the ground that were filled with votive objects such as pottery vessels, food remains and other tools as a sign that a tomb construction is being initiated."

"The ancient Egyptians usually did four or five foundation deposits whenever they started a tomb's construction," Hawass said. Additionally, "the radar did detect a substructure that could be the entrance of a tomb."

As for whose remains were buried there, Hawass said the tomb could belong to Ankhesenamun, who was the wife of Tutankhamun (reign 1336-1327 B.C.). Ankhesenamunmarried Ay after King Tut died, so it's possible that her tomb is located near Ay's, Hawass said.

Hawass said he will direct the future excavations at the site.

Hawass was head of Egypt's Supreme Council of Antiquities between 2002 and 2011, and was Egypt's first minister of state for antiquities after the post was created in January 2011. He resigned from the post in July 2011. Currently, Hawass is Director of the Italian expedition in the Valley of the Kings.

Update: In an email to Live Science on July 10, Hawass cautioned that until excavations take place, he can't say for sure that a tomb has been discovered, and it is still possible that there is no tomb. "It is all possibilities until we excavate," Hawass said.