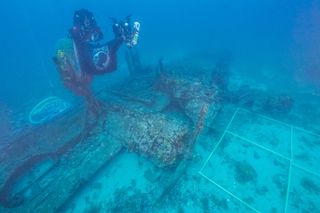 Underwater archaeologists visit the wreck of the Tulsamerican off the coast of Croatia.
(Image: © U.S. Embassy Zagreb)

On Dec. 17, 1944, an American bomber nicknamed the Tulsamerican crashed into the Adriatic Sea with 10 crewmembers on board. Seven of those airmen were plucked out of the waves by local fishermen and rescuers. Three were lost.

In an effort to bring home the remains of those missing airmen more than 70 years later, underwater archaeologists have just completed a recovery mission to the sunken World War II aircraft. They collected possible human remains as well as military equipment and other items such as a life vest and flight boot.

"It was incredibly emotional for all of us," underwater archaeologist Brendan Foley told Live Science Thursday (July 13) when he got back to the Croatian mainland after the monthlong project. [Photos: Underwater Robots Help Recover WWII Plane Wrecks]

The Tulsamerican was the last B-24 bomber of its kind built in Tulsa, Oklahoma, in 1944. (More than 18,000 B-24s were produced during the war.) The Douglas Aircraft Co. employees who built the plane bought war bonds to help pay for its construction and signed their names on the exterior.

In its final flight at the end of World War II, the Tulsamerican survived a fight with the German air force but was badly damaged. The aircraft circled an emergency landing strip on an island but lost power and ultimately crashed off the coast of what is today Croatia.

Divers first located the wreck near the small Croatian island of Vis in 2010. Underwater archaeologists then surveyed the area where the Tulsamerican was resting in two big pieces about 135 feet (41 meters) below the surface.

"When the aircraft crashed, it was a violent impact," Foley said. The nose section is badly damaged, "almost peeled open like a banana," he added, though divers could still recognize many features like the seats where the pilot would have sat.

The team collected any material that looked like bone. The researchers hope that DNA analyses will be able to link any remains to the airmen who were lost (Lt. Eugene Ford, Sgt. Charles Priest and 1st Lt. Russell Landry) so that they can receive proper burials. The divers also brought to the surface equipment and clothing that could be related to the servicemen and several tons of soil that might contain smaller artifacts.

The effort was coordinated by the U.S. military's Defense POW/MIA Accounting Agency, which is tasked with bringing home remains of lost service personnel. About 73,000 Americans who served in World War II remain unaccounted for, and about 26,000 of those are assessed as "possibly recoverable." The wreck of the Tulsamerican is just at the edge of depths sport divers can reach, Foley said. As looting is always a concern, the recovery project was initiated soon after the discovery of the possible war grave.

Foley, who is a researcher at Lund University in Sweden, normally works on much older sites. His team is also studying the 2,100-year-old Antikythera wreck off the coast of a Greek island that is famous for its cache of ancient statues and a bronze "computer" dubbed the Antikythera mechanism. When the divers found human bones at the Antikythera wreck last summer, "we were happy and elated for the possibilities for science," Foley said, but the team's mood while excavating the Tulsamerican was "completely different." He described the somber experience of exploring a site that's been formed in living memory and looking for graves of men whose pictures the researchers have seen.

"We're all still trying to get our heads around what we just experienced," Foley said. "This is the most worthwhile thing we've ever done underwater.”