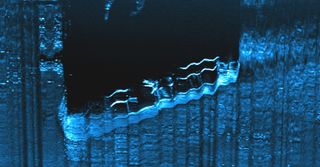 A sonar image of Bluefields, the merchant marine sunk by U-576's torpedoes. It only took the ship 12 minutes to sink, according to NOAA, but the crew all escaped with minor injuries.
(Image: © NOAA)

Two World War II vessels that sunk within moments of each other 72 years ago have been rediscovered on the floor of the Atlantic Ocean, resting only a few hundred yards apart.

The Allied merchant freighter Bluefields and the German U-boat U-576 went down on July 15, 1942, part of the larger Battle of the Atlantic that raged throughout the war. The shipwrecks were found by a team of researchers from the National Oceanic and Atmospheric Administration (NOAA) and the Bureau of Ocean Energy Management.

"We have discovered an important battle site that is part of the Battle of the Atlantic," Joe Hoyt, a NOAA sanctuary scientist and chief scientist for the expedition, said in a statement. "These two ships rest only a few hundred yards apart and together help us interpret and share their forgotten stories." [See Images of the 2 WWII Shipwrecks in the Atlantic]

The Battle of the Atlantic began with the blockade of German ships in the Atlantic by Allied forces, and raged back and forth as the German and Italian navies sought to prevent the Allies from moving their own supply and troop ships. German submarines known as U-boats were serious threats to Allied ships in this conflict. In the first eight months of 1942 alone, more than 50 merchant ships were lost to U-boats patrolling off the North Carolina coast, NOAA estimates.

On July 14, 1942, a convoy of merchant ships guarded by U.S. Coast Guard cutters and Navy ships left port in Virginia, headed for Key West, Florida. Their course set them, unknowingly, on an intercept path with the German U-boat U-576 off the coast of North Carolina. The U-576 had been damaged and was headed back to Germany, but its captain could not resist the chance to attack the merchant convoy when it came into the U-boat's sights on July 15.

Around 4:15 p.m. that day, the U-576 fired four torpedoes, one of which hit the Bluefields, which was sailing under a Nicaraguan flag, according to NOAA. The Bluefields went down in minutes — though all of the crewmembers onboard survived.

However, the U-576 crew was not so lucky. The response from the U.S. Navy escort ships was swift, and two depth charges quickly sank the U-boat. All 45 crewmembers died.

The historical record marked the location of this battle, but the exact spots where the shipwrecks had landed were lost. Using sonar and other remote-sensing technology, researchers scoured the seafloor about 30 miles (48 kilometers) off the coast of North Carolina beginning in 2013. Ghostly shapes emerged, seven of which held great promise as shipwreck sites. In August 2014, a survey of two of these sites definitively identified the U-576 and the Bluefields.

The two wrecks sit only 240 yards (219 meters) apart. Sonar images show both ships in recognizable condition, with the U-576's distinctive conning tower still intact. The site is now considered a war grave for the 45-member crew of the U-boat. As such, it will be protected under international law.

"The Federal Republic of Germany is not interested in a recovery of the remnants of the U-576 and will not participate in any such project," said the German Foreign Office in a statement. "It is international custom to view the wreckage of land, sea and air vehicles assumed or presumed to hold the remains of fallen soldiers as war graves. As such, they are under special protection and should, if possible, remain at their site and location to allow the dead to rest in peace."

The discovery of the two ships holds significance beyond the wrecks alone, said David Alberg, the superintendent of NOAA's Monitor National Marine Sanctuary.

"Most people associate the Battle of the Atlantic with the cold, icy waters of the North Atlantic," Alberg said in a statement. "But few people realize how close the war actually came to America's shores. As we learn more about the underwater battlefield, Bluefields and U-576 will provide additional insight into a relatively little-known chapter in American history."