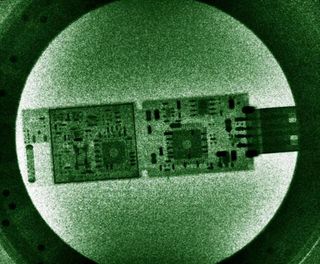 The world's brightest laser — which is so powerful that it can produce light pulses that are 1 billion times brighter than the surface of the sun — can "transform" visible light into X-rays, making the shape and color of objects appear different, new research shows.

These X-rays could be much less harmful than current computed tomography (CT) machines and provide much-higher-resolution images, the researchers said.

In the new study, published online June 26 in the journal Nature Photonics, a team from the University of Nebraska-Lincoln led by physicist Donald Umstadter described an experiment they had conducted using their superpowerful Diocles laser, named after an ancient Greek mathematician. [The 18 Biggest Unsolved Mysteries in Physics]

When directed onto a beam of electrons, the photons of the laser beam started scattering in a completely different way than when illuminated by weaker light, the researchers found.

"Normally, as you turn up the light brightness with the room light dimmer switch, everything in the room looks the same as it did at lower brightness of lighting but just brighter," said Umstadter, who works at the University of Nebraska-Lincoln's Extreme Light Laboratory.

When the physicists turned the brightness of the laser to a much higher level, the scattering process changed in a way that would make, for example, objects in a room appear differently.

Scattering is a process in which light particles are deflected from their trajectory after hitting other particles. In the case of the Diocles laser, a single photon would scatter with a single electron, Umstadter said. The electron would, as a result, emit a single photon of light. However, as the light intensity of the laser reached a certain point, every electron started scattering simultaneously with a large number of photons.

"As a result, the electron emitted a photon, which had the sum of all the energies of those photons that were illuminating it, and so the scattered light had a much higher energy than the photons that illuminated it," Umstadter said. "In fact, the energy was so high that it would be in the X-ray regime of light. It was an X-ray, not a visible photon as our laser is."

The angle of the emitted light changed, which means an object illuminated with such bright light would suddenly have a different shape, Umstadter said. In addition, the energy of the light, which determines color, changed.

Still, even though it acquired X-ray properties, the light emitted by the electrons behaved differently compared with conventional X-rays. "Typical X-rays are produced by a completely different mechanism, and they look more like a light bulb," Umstadter said.

"If a light bulb is a white light, it has all colors represented," Umstadter added. "A laser is typically one color, and it is a very narrow beam — it's what we call coherent. Our X-rays are much more coherent than typical X-rays, and they have a much higher resolution."

Umstadter said an imaging system based on the technology would be able to see much smaller details than conventional X-ray machines can. For example, in medical applications, this could lead to the ability to detect changes in tissues, such as cancer tumors, at earlier stages.

Umstadter said that using X rays based on the technology would allow decreasing the dose of radiation up to ten times, which would reduce the patients’ risk of developing cancer.

It is known that even small doses of X rays can increases cancer risk although by a very small amount. The smaller the amount however, the lower the risk.