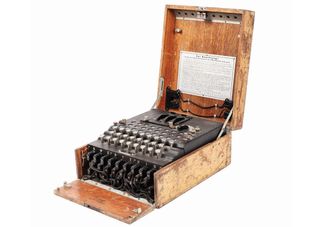 A German cryptography machine found at a flea market recently fetched $51,000 at auction.

The Enigma machine, which was sold by the art auction house Artmark, was first spotted by an eagle-eyed cryptography professor who was wandering in the flea market in Bucharest, Romania. The professor immediately recognized its significance. However, he played it cool and managed to snag the item for 100 euros ($114), Deutsche Welle reported. Now, the machine has sold for 45,000 euros ($51,000), netting him a tidy profit.

The Enigma machine is just one of many items of science history sold at auction recently: A letter from Einstein that was auctioned in May fetched nearly the same amount, or around $54,000.

Enigma machines were special encryption machines that were used by the Germans during World War II to send secure messages to their forces. While the initial code was cracked by Polish mathematicians on the eve of World War II, that didn't get them very far.

The Germans would constantly change the key used to decode their messages, and reset their machines, making it challenging for Allied forces to decipher their messages. However, during the war, a set of code-breakers led by Alan Turing at England's top-secret Bletchley Park managed to break the Enigma code even with constantly changing keys.

The Enigma machine that just sold is an Enigma 1, which was made by Heimsoeth & Rinke in 1941. It is still usable and comes in its original box. The box likely wound up in Romania because during the war, Germany and Romania were allies. About 20,000 Enigma 1 machines were made, although few remain in existence today, Deutsche Welle reported.