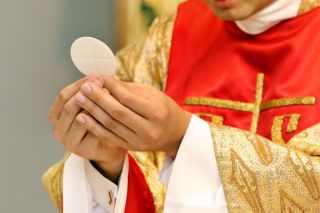 The bread used in Catholic communion rites must contain a trace amount of gluten, according to a Vatican directive.

The circular letter (or one that is circulated to a group of people such as the clergy), released June 15, is not new policy: It reaffirms previous church guidelines regarding the host, which also reject additives like fruit or honey. According to the letter, congregants who cannot consume the wheat protein gluten because of celiac disease, an allergy or another serious reason may use bread that is low-gluten — which, confusingly, is often marketed as gluten-free in the United States and Europe. But bread made out of rice, tapioca or non-wheat grains is not acceptable.

So why is the church concerned about the presence of a particular wheat protein in bread? [Proof of Jesus Christ? 7 Pieces of Evidence Debated]

The reason has to do with the definition of bread. Communion is a rite that traces back to the early Catholic Church. In St. Paul's First Epistle to the Corinthians (in the Bible's New Testament), which was written around A.D. 53 or 54, Paul lays out the ritual and its roots in the Last Supper, Jesus Christ's final meal before the Crucifixion:

"For I have received from the Lord that which also I delivered unto you: that the Lord Jesus, the same night in which He was betrayed, took break," reads the King James translation of the passage, "and when He had given thanks, He broke it and said, 'Take, eat; this is My body which is broken for you: this do in remembrance of Me."

Under Catholic doctrine, consecrated bread and wine transubstantiate, or become the literal body and blood of Christ. Thus, the purity of the bread and wine are important, said Rev. Andrew Menke, the executive director of the Secretariat of Divine Worship for the U.S. Conference of Catholic Bishops. [Who Was Jesus, the Man?]

"Jesus just used wine, and Jesus just used bread, and the basic definition of bread is wheat flour and water," Menke told Live Science, referring to the unleavened bread that Jesus and his disciplines would have eaten. "So we feel that if we started adding things to that, honey and so forth to make it taste better, we feel that we are somehow compromising the integrity."

The new circular letter is a mere reminder to the bishops of how to manage the bread and wine chosen for the Eucharist, Menke said. The Congregation for Divine Worship and the Discipline of the Sacraments sets the standards to be used; in 2004, that Congregation put out a report called the Redemptionis Sacramentum that explained the requirements for the bread:

"The bread used in the celebration of the Most Holy Eucharistic Sacrifice must be unleavened, purely of wheat, and recently made so that there is no danger of decomposition. It follows therefore that bread made from another substance, even if it is grain, or if it is mixed with another substance different from wheat to such an extent that it would not commonly be considered wheat bread, does not constitute valid matter for confecting the Sacrifice and the Eucharistic Sacrament. It is a grave abuse to introduce other substances, such as fruit or sugar or honey, into the bread for confecting the Eucharist. Hosts should obviously be made by those who are not only distinguished by their integrity, but also skilled in making them and furnished with suitable tools."

At one time, religious communities of monks and nuns were charged with making the wine and the bread used in Holy Communion rites, Menke said. Today, communion wafers are available online and wine bottles line liquor and grocery store shelves. Menke speculated that the recent circular letter may have arisen more over concerns about wine purity than bread.

"The Holy See realizes that people are probably buying wine that's not specifically made for Mass," he said. "It doesn't mean it's wrong or that it can't work for Mass, but they just want to remind bishops that it's important to pay attention to how things are made."

Accommodations are made, though, for those with conditions that make consuming alcohol or gluten impossible. Priests may choose "gluten-free" breads made from wheat, which have had almost all of the offending protein removed, according to a 2003 circular letter; a trace amount (no more than 20 parts per million, according to food regulators) may remain, which the church considers acceptable. Gluten-free products not made from wheat are considered too far removed from the original intent of the Eucharist to count.

For those who can't handle even a trace amount of gluten without medical repercussions, the Catholic Church allows receiving communion with wine alone. Likewise, those who cannot consume wine may use mustum, which is grape juice that has been only slightly fermented under specific guidelines so that it has a negligible alcohol content.