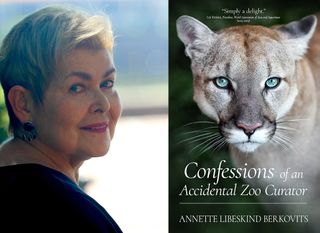 Join Live Science as we speak with Annette Libeskind Berkovits, author of "Confessions of an Accidental Zoo Curator."

Her memoir describes the three decades Berkovits spent developing and overseeing education programs for the Wildlife Conservation Society in New York at the iconic Bronx Zoo, one of the largest wildlife conservation parks in the United States.

In the book, Berkovits outlines her "zoo life," learning the ins and outs of an enormous institution housing thousands of captive wild animals, and educating the public about the Bronx Zoo's myriad inhabitants — both at the zoo, and in collaborations with other scientific institutions, educators and researchers around the world. [Read an excerpt from the book]

As the title implies, Berkovits didn't initially expect to find herself in a career as a zoo curator. But when she began working for the Bronx Zoo in 1972, she soon realized the place's potential to perform as an ambassador for wildlife conservation, and she set out to incorporate that message into a wide range of public programs, such as overnight safaris and science camps. Zoos bring the public face-to-face with animals that they would typically never encounter, and Berkovits explains in her book how the wonder inspired by the creatures glimpsed at a zoo could spark a lasting interest in nature and biodiversity.