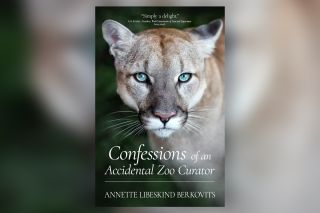 What goes on behind the scenes at a zoo? Author Annette Libeskind Berkovits, retired Senior Vice President for Education at the Bronx Zoo, has plenty of stories to tell. In "Confessions of an Accidental Zoo Curator," Berkovits describes a career at the zoo that spanned three decades, during which she worked to shape the zoo's education and outreach program to help visitors learn more about the animal inhabitants, and to understand the challenges that many of them face in the wild due to human activity. At the same time, she brought the zoo's conservation messages and education initiatives to locations around the world. Below is an excerpt of "Confessions of an Accidental Zoo Curator" (Tenth Planet Press, 2017).

Excerpt from Chapter 6: "On the Way to Stardom"

When I aced my job interview, it was assumed that I either knew how to handle animals or would be a quick study. Since it wasn’t entirely clear what my duties would be, I hadn’t even thought to inquire if animal handling was a part of the job. I wasn’t about to blow my cover.

"OK," I said. "Let’s put her in a case." Inside, my guts were twisting in primeval dread.

"You know, the carrying case," I said, trying to sound like an expert.

She looked at me. "Um, how long have you been working here? You should know that snakes go out in pillow cases."

At first I thought she was pulling my leg, but I saw her rifling through a pile of linens stacked in the corner of the stainless-steel counter.

"Shit," she said, "I don’t have any of the big ones here. I just threw them into the washing machine." She pointed at the end of the building where the washer was spinning. I glanced at my watch and knew that if I didn’t go out and wait for the cab at the gate, the driver would leave, thinking he had been duped.

She opened the cage, reached in and took out Harriet, trying to balance her heft on both arms.

"Here, I have an idea," she said, and moved uncomfortably close. "Wrap her around your waist, like this." Before I could respond, she began draping the lethargic boa around my middle. "On a cold day like today she will hardly move." Kim looked like a fashion designer installing a new-fangled belt on a model. Then she said, "Perfect, your sheepskin coat will keep her cozy. It’s better than a pillow case."

"There, close those coat buckles and go." She moved on to another task.

I had no choice. Gingerly, I adjusted Harriet’s smooth cool body and made sure her muscular bulk was evenly distributed around my waist. She felt nearly as heavy as my four-year-old son. For the moment, my nervousness about being late to the TV studio overshadowed my fear. I walked out toward the side entrance just as the security guard opened the metal gate and a yellow taxi skidded to a stop on the slippery entrance path.

The cabbie rolled down the window, looked me over from head to foot and whistled. "Let’s go," he said, "Before the traffic gets any worse." I got into the back seat, inhaling an unidentifiable scent of air freshener fighting to overpower the tobacco stink. I hoped the odors wouldn’t annoy Harriet, but she remained as inert as a thick brown belt. After the shock at my circumstance wore off a little, all I could think of was, if only Donna could see me here, sitting in a taxi with a huge serpent snuggled up to my belly, a regular Eve earning her daily bread.

Unlike most New York City cabbies, this guy was not a talker. All he did was occasionally leer at me in the rear-view mirror. Our eyes met silently, and I knew better than to engage him in small talk. We drove past several of the Bronx streets that gave the otherwise lovely borough a bad name: boarded up windows, graffiti, overflowing garbage cans, seedy-looking men loitering in front of bodegas. When we got on the Sheridan Expressway, the Manhattan skyline rose before me like a mirage. Soon I’d be making my television debut. Anything was possible in this enchanted city.

I was so absorbed that I hadn’t noticed how warm the cab had become. Little beads of perspiration began to form on my forehead. Harriet stirred, a little at first, then more. I felt her undulating movements along my waist like a strange massage. It was odd, but for a while my fear had mostly abated, but then I started wondering. When was she last fed a plump rat or freshly-killed chicken dinner? Could she be hungry? I visualized a boa skull with its needle-like rows of backward-pointed teeth that would not allow the prey to escape, its stretchy mouth ligaments that could take in an animal much larger than its head. She had me in the perfect position. Like any constrictor, all she had to do was tighten her grip until my lungs could no longer expand and take in air.

"It’s very warm in here," I announced to the driver as we drove through midtown at last, getting close to my destination. "Any chance you can turn down the heat?" I asked urgently, because Harriet was now cruising around me and I worried she’d slither away. What would I do if she got stuck under the seat, or made her way into the trunk? Worse yet, she might slide up, reach my face and plunge her teeth into my cheek. The warmth had animated her; she must have thought she was in her tropical South American home again and my waist was a heck of a tree trunk. As soon as this ridiculous notion invaded my brain, I realized that I didn’t really know if she had been collected in the wild or if she was captive bred. I knew that boas raised in captivity were more docile, but Harriet’s provenance was a mystery. I began to sweat profusely and kept adjusting her around my middle. Then I noticed the driver glancing up at the rear-view mirror with a look of intense curiosity.

Finally, he asked, "Hey, lady, whatcha got there?"

Accidental Zoo Curator
Amazon
$17.99
View
We check over 130 million products every day for the best prices
Sign Up for e-mail newsletters