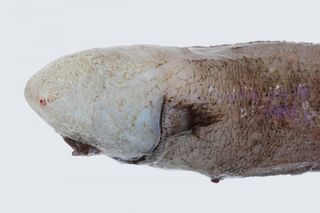 This "faceless cusk" was caught at depths of 13,000 feet (4,000 meters) during a voyage to a massive abyss off Australia's east coast.
(Image: © John Pogonoski/CSIRO Australian National Fish Collection)

Eyesight may not be necessary for some deep-sea dwellers, but scientists recently came across a fish that appeared to not have any eyes at all — or even a face.

Australian researchers found the strange-looking, "faceless" fish during an expedition of a massive abyss off Australia's east coast. They discovered the deep-sea fish about 13,000 feet (4,000 meters) below the surface. It lives along a relatively barren seafloor in waters that are about 34 degrees Fahrenheit (1 degree Celsius).

Though the scientists initially thought the deep-sea creature might be a new species, further research revealed that the fish is a species of cusk eel (Typhlonus nasus) that has not been seen in Australian waters since the late 1800s. [See Photos of the Strange-Looking "Faceless" Fish]

Lacking clearly defined eyes, and with a mouth located underneath its body, the fish seemed to not have a face, the researchers said.

"Although very little is known about this strange fish without a face, it does have eyes — which are apparently visible well beneath the skin in smaller specimens," researchers wrote in a blog post on Australia's National Environmental Science Program's (NESP) Marine Biodiversity Hub website.

Eyes were not discernable on the recent specimen, which the researchers said could be the largest T. nasus ever seen.

T. nasus, which the scientists now call the "faceless cusk," is rarely seen but widely distributed from the Arabian Sea to Hawaii. The cusk was first collected by the historic HMS Challenger, the first round-the-world oceanographic expedition. According to the researchers, the Challenger collected the faceless cusk on Aug. 25, 1874, at a depth of nearly 3 miles (4.5 kilometers) in the Coral Sea.

In 1951, five faceless cusk specimens were collected during a deep-water search off East Kalimantan, Borneo. As such, the Australian researchers said they may find another faceless cusk as they move north of the site where the creature was most recently found.