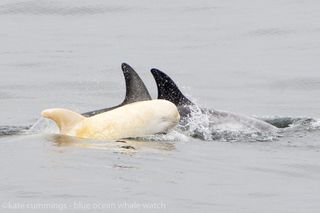 A 3-year-old albino dolphin was spotted swimming with its mom in California's Monterey Bay last week, and the little one appears healthy, scientists say.

The crew of a Blue Ocean Whale Watch boat saw the albino Risso's dolphin (Grampus griseus) swimming with its mom on June 7 about 3 miles (nearly 5 kilometers) offshore near Moss Landing. They identified it as the same animal that was last seen on Sept. 29, 2015, said Kate Cummings, a naturalist and co-owner of the whale-watching company. Before that, other tour operators had seen the albino animal in Monterey Bay in 2014, when it was a small calf, she said.

"Albinism in the wild is incredibly rare, and I believe this is the only known albino Risso's dolphin in the eastern Pacific," Cummings told Live Science. [See Photos of the Rare Albino Risso's Dolphin]

Albino animals like this one are white (or pink) because the cells that normally produce melanin — the pigment that gives skin, hair and eyes their coloration — are not doing their job (or not doing it well). Its pink eyes result from light reflecting off the red blood vessels in the dolphin's retinas, the light-sensitive tissue at the back of the eye. Nonalbino animals have melanin in their pupils that absorbs incoming light, keeping it from reflecting off of the retina.

This white dolphin may look cute, but albino animals often have health problems. "Albino animals may be more prone to skin problems because there's no melanin to protect the skin from UV [ultraviolet] rays, and they can have poor eyesight and hearing," Cummings said. "As far as we can tell, this juvenile appears healthy."

When Cummings and her crew spotted the dolphin, it was swimming with its mom and a pod of about 50 Risso's dolphins, including many other juveniles.

"Risso's dolphins often form nursery pods, which consist of mothers and their calves," Cummings said. "They were most likely on the hunt for squid, their favorite food source."

Squid are partly to blame for the circular markings seen on most Risso's dolphins, according to the National Oceanic and Atmospheric Administration (NOAA). Risso's dolphins sometimes rake their teeth against other dolphins' bodies, which can also result in scarring.

No other cetacean has the distinctive vertical crease seen on the foreheads of these dolphins, which have indistinguishable beaks, according to NOAA.