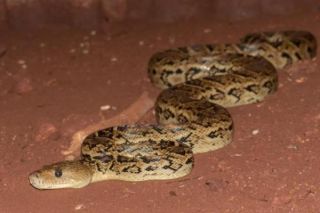 Researchers found that cave-dwelling Cuban boas will oordinate their hunts to increase their chances of catching prey.
(Image: © Vladimir Dinets/University of Tennessee)

When cave-dwelling Cuban boas fancy a meal, they band together to hunt for bats by concealing themselves along the cave entrance and forming a wall of deadly snakes before launching their coordinated strikes, according to a new study on the rare occurrence of snakes hunting in packs.

Though snakes are sociable, researchers have largely considered the reptiles to be solitary in their hunting and eating. But these new observations of the Cuban boas' pack-hunting offer evidence that some snakes hunt in groups. Of the 3,650 snake species known in the world, only a few have been observed hunting in the wild, according to the scientists.

And coordination among snakes to catch prey has never been proved, said study author Vladimir Dinets, a professor of psychology at the University of Tennessee in Knoxville, who specializes in animal behavior. [Shhh: A Gallery of Secretive Ground Snakes]

"It is possible that coordinated hunting is not uncommon among snakes, but it will take a lot of very patient field research to find out," Dinets said in a statement.

The Cuban boa is the largest native terrestrial predator in Cuba. Cuba is also home to bat-filled caves, where small groups of boas will regularly hunt bats as they fly in and out of the cave, according to Dinets. He studied the snakes' hunting style, which included hanging down from the cave ceiling to grab bats as they flew through the entrance.

When more than one boa was hunting, Dinets observed the snakes coordinating their positions to more effectively nab their prey.

"Snakes arriving to the hunting area were significantly more likely to position themselves in the part of the passage where other snakes were already present, forming a 'fence' across the passage and thus more effectively blocking the flight path of the prey, significantly increasing hunting efficiency," Dinets wrote in the study.

When a lone boa would strike, it sometimes failed to catch a bat. The group hunts, however, were always successful, Dinets said.

The study's findings were published online Feb. 2 in the journal Animal Behavior and Cognition.