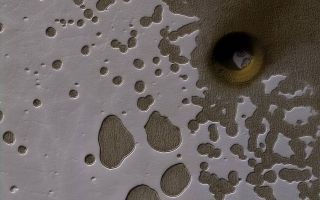 This photo from NASA's Mars Reconnaissance Orbiter shows a crater or pit in the planet's southern hemisphere, where it is currently summer. Carbon dioxide ice gives the region a "swiss cheese" look in this view released June 2, 2017.
(Image: © NASA/JPL-Caltech/University of Arizona)

Scientists aren't sure if a big dimple on Mars came from something smacking into the Red Planet's surface or if was simply caused by a collapse.

But at upper right is a deeper pit that goes through the ice and dust, which NASA says could be an impact crater or some sort of collapse pit. [See more amazing Mars photos by MRO]

The picture was taken in the southern hemisphere of Mars late in the summer and unveiled Friday (June 2). At the time the image was taken, the sun was low in the Martian sky and the shadows it cast allowed for more "subtle" topography to show in the image, NASA officials.

MRO takes detailed pictures of the surface using the University of Arizona's High Resolution Imaging Science Experiment (HiRISE) camera. The spacecraft launched in 2005 and has been orbiting Mars since 2006.