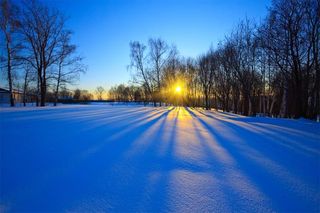 The winter solstice marks the shortest day of the year, when the sun is at its lowest point in the sky.
(Image: © Stockxpert.)

You may think Mr. Frost's blustery entrance already occurred, but not officially. The winter solstice, and thus the official start of the chilly season on the astronomical calendar, begins Monday.

Here's what's behind the timing:

The Earth is tilted on its axis 23.5 degrees, so it leans one way as it spins around its axis while orbiting the sun. On Dec. 21, the top half of our planet (everything north of the equator) will face directly away from the sun, leaving the North Pole in complete darkness.

For elves and reindeer, the real feel of winter began long ago, of course. In fact the sun set at the North Pole in late September, and there has been no sunlight nor even twilight since early October. Dawn won't break until early March.

For those of us not near Santa's hut, we'll still notice the effect of all this tilted science, though not so dramatically. The winter solstice is the day when the sun crosses the sky at its lowest trajectory as seen from the Northern Hemisphere, and so its apparent trek from rising to setting is super quick. Result: the shortest day of the year.

On the bright side, starting Tuesday the days will begin getting longer.

Where we live in the mid-latitudes, daylight ranges from about 15 hours around the summer solstice (when the Northern Hemisphere is tilted toward the sun) to around 9 hours close to the winter solstice.

With less sunlight energy hitting us, temperatures drop. Surprisingly, the Earth is actually closer to the sun during winter in the Northern Hemisphere. It's the tilt that gets us.

And in fact the coldest days of the year are yet to come. Though the days will get longer during January, Northern Hemisphere oceans continue to cool in the relative lack of sunlight, and ocean temperatures drive much of the weather on the continents.

If you're looking to travel to warmer climes, here's how to choose a venue: On Monday, the sun will be positioned directly over the Tropic of Capricorn, which is a circle of latitude that marks maps of Earth and passes through South America, the southern tip of Africa and Australia. These spots might be your best bet to catch some rays.

Our dance around the sun has been the basis of calendars as long ago as the fourth century B.C. Such peoples in the Americas even built solar observatories of stone to mark the solstices and other times important for planting or harvesting crops. Shrines and even tombs were also designed with the sun in mind.