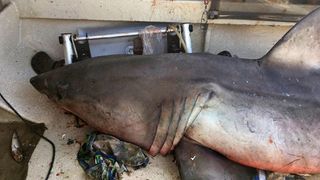 A great white shark jumped into a boat off the north coast of New South Wales, Australia, on May 27, 2017.
(Image: © Lance Fountain/Marine Rescue Evans Head)

An Australian man got the surprise of a lifetime when a 9-foot (2.7 meters) great white shark weighing 440 lbs. (200 kilograms) jumped into his boat.

Terry Selwood, 73, was fishing off the north coast of New South Wales, Australia, on Saturday (May 27) when he suddenly found himself face to face with the ocean predator.

"There I was on all fours, and he's looking at me and I'm looking at him, and then he started to do the dance around and shake, and I couldn't get out quick enough onto the gunnel [or gunwale]," Selwood told ABC news, referring to the upper edge of the side of the boat.

The shark thrashed violently in a boat only 4.5 feet wide (1.4 m) and 14 feet (4.3 m) long. Selwood was able to grab the radio and call for help. A local marine rescue unit at Evans Head came to pick him up and later towed his boat back to port. [See Photos of Great White Sharks Breaching the Water's Surface]

Besides a minor cut on his arm, Selwood was unharmed. But why would the shark jump into his boat?

Selwood claimed he had no bait or lures close to the surface to tempt the shark to launch some 4 feet (1.2 m) out of the water and into his boat.

There are just three reasons a great white would ever jump into a boat, said George Burgess, director of shark research at the Florida Museum of Natural History.

"It's either caught by the angler, it follows a hooked fish to the surface and its momentum has it jump out of the water onto the boat, or a 9-foot shark in the ocean at random jumps up and lands in the boat," Burgess told Live Science. "The first two instances are much more likely than the last."

Despite what you may have seen on Discovery Channel's "Shark Week," great whites are not well-known for their jumping abilities, Burgess said. Mako and thresher sharks are more given to leaps from the water than great whites, he said.

A shark jumping into a boat without first being drawn somehow to the boat would be extremely rare, Burgess said.

In most documented cases of sharks landing in boats, the people involved were either fishers or biologists. In a 2013 case, a mako shark jumped into the back of a fishing boat off the coast of New Jersey, according to USA Today. In 2011, a great white shark leapt into the back of a South African research vessel, News Corp Australia reported.

"Sharks are unpredictable animals, but they don't just jump into boats for no reason," Burgess explained.

A great white shark breaks the water's surface only while hunting for food, Burgess said. At those times, the animal swims beneath prey and may look up and recognize the silhouette of an animal like a seal or porpoise. The shark then swims at great speed straight up, and the tremendous momentum generated launches the predator up from the waves, Burgess said. Great white sharks can swim at speeds of up to 25 mph (40 km/h), according to ReefQuest Center for Shark Research.

The silhouette made by a 14-foot boat would automatically send a signal to any shark that this potential meal is far above its weight class, Burgess said. A smaller boat, however, could attract a shark mistaking the vessel for prey, he noted.

If your boat just happened to be passing a shark at the exact moment it was striking at its prey, the animal could land in your boat without any lure or provocation from you, Burgess said. But the odds of that happening are incredibly long, he said.

"We're missing a lot of information. I'd certainly need that information" about the Selwood case, Burgess said. "My inference, and it's purely inference, is that one should look at the story more closely."