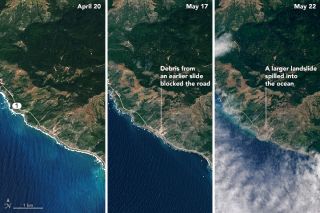 The landslide, which sent more than 1 million tons of rocks and dirt across California's scenic coastal Highway 1, occurred on the night of May 20. Before the huge rockfall, a smaller one occurred earlier in the spring.

"This is a large slide preceded by smaller slides, which is not uncommon," Thomas Stanley, a geologist and researcher for NASA, said in a statement. “Much of the California coastline is prone to collapse, so it’s fortunate that this landslide happened in an unpopulated location.”

The dramatic collapse covered about 0.3 miles (0.5 kilometers) of the scenic byway in 35 to 40 feet (10.6  to 13.7 meters) of rubble. It also created 16 acres of land that jut out from the Big Sur coastline, the San Jose Mercury News reported.

The massive landslide could close Highway 1 for a year, according to Caltrans, the California department of transportation.

The area is still vulnerable to further landslides.

“There’s still little rocks coming down and you can hear it," Susana Cruz, a Caltrans spokeswoman, told the San Jose Mercury News.