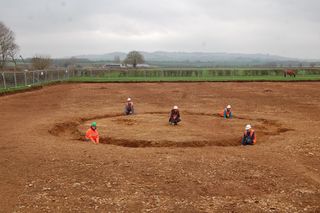 Archaeologists in England discovered a Neolithic earthwork and burial site that could date back to 2000 B.C.
(Image: © Archaeology Warwickshire)

This Neolithic earthwork was found in Newbold-on-Stour, in Warwickshire County, this spring, ahead of the construction of houses. Developers in England often need to conduct an archaeological assessment of the land they want to build on. And when a geophysical survey revealed that there could be a henge at this site, a team from Archaeology Warwickshire started digging.

The archaeologists announced this week that they found a simple monument that consists of a circular ditch dug in segments and an embankment created from that dug-out soil. They also found five bodies buried within the monument. [See Photos of the Newfound Henge and Burials]

Hundreds of henge monuments are scattered across the British Isles. Some, like Stonehenge, consist of giant, standing megaliths arranged in circles. Others, like Woodhenge, once had timber structures, though postholes are all that remains. These henge monuments also vary in size; two years ago, archaeologists using remote-sensing technologies discovered the remains of a henge 15 times the size of Stonehenge.

Archaeologists still debate the purpose and the origin of henges, but researchers know that the earthworks started showing up in the British Isles in the third and early second millennia B.C. Most of these monuments contain no traces of everyday activity, and some feature burials or are aligned with cosmic phenomena. So, some researchers believe henges must have had some sort of ceremonial or ritual significance.

"Unfortunately, we don't have any ideas of the types of rituals or events that would have taken place within the center of the monument," Nigel Page, a project officer with Archaeology Warwickshire, told Live Science about the newfound henge. But, Page said, archaeologists will be looking at the Newbold henge's possible links to events like significant sunrises or sunsets during the postexcavation phase of the project.

The researchers said they think the newly discovered monument dates to the later Neolithic, around 2000 B.C. They may be able to refine that date slightly by studying the human remains recovered in the ditch, Page said. It is possible that the graves came much later than the original earthwork; perhaps the henge was chosen as a good burial spot because it was an important monument in the landscape for a long time.

None of the graves overlap, the Archaeology Warwickshire team said. The three middle burials face west out from the henge. Then, there are two burials on the outer part of the monument that face east, into the henge. The archaeologists said this arrangement seems deliberate and suggests that the people were buried as a group or were part of a family.

The skeletons are rather complete, and the researchers said scientific tests on the bones might help determine the relationship between the people and the site.

Antler fragments were the only other surviving artifacts found in the ditch. The researchers said they will test soil samples from around the burials for microscopic bits of charred plant remains, pollen, shells and other environmental features to learn more about the people and what they were doing at this monument.

The Newbold-on-Stour monument isn't the only henge to be revealed in the region recently. The Archaeology Warwickshire team said it is also analyzing four similar monuments in the nearby town of Bidford-on-Avon, which contained the cremated remains of at least 11 people.