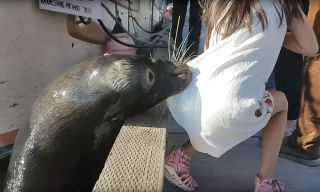 A young girl who was pulled underwater by sea lion in Canada is now receiving treatment for an infection known as "seal finger," just to be on the safe side, according to news sources.

Earlier this week, a video that went viral showed a sea lion — likely a male California sea lion (Zalophus californianus) — grabbing the girl's dress with its teeth as she stood with her family on a wharf in Richmond, British Columbia. The animal then briefly pulled the girl underwater.

The 6-year-old's grandfather immediately jumped into the water to save her, but the ordeal left her with wound measuring about 2 inches by 4 inches (5 by 10 centimeters) on her lower body, according to CBC News. [27 Devastating Infectious Diseases]

Seal finger predominantly affects the fingers, but the infection can also occur in other places in the body, said Daniel Brown, an associate professor and chairman of infectious diseases and immunology at the University of Florida's College of Veterinary Medicine. Brown was not involved in the girl's case, but was part of a team that diagnosed and treated another recent case.

For instance, if a seal bites a person on the leg, the infection might stay within the leg, or the bacteria could travel through the blood and infect another part of the body, Brown said.

However, no matter the location of the infection, the condition is still called seal finger, he said.

"That's kind of an 'old time' name, but it is appropriate because wound infection occurs often on the hands of people who have contact with the seals due to seal bites or introduction of seal blood, seal saliva, etc. into pre-existing cuts on the person's hand," Brown wrote to Live Science in an email.

The girl's family took her to British Columbia Children's Hospital, where doctors prescribed her antibiotics as a precautionary measure, CBC News reported.

The family learned about the infection after hearing a mammal trainer from the Vancouver Aquarium mention it in several interviews, aquarium spokeswoman Deana Lancaster told ABC News. It's unclear whether the girl actually has seal finger, but she's getting treatment just to be on the safe side, Lancaster said.

Seal finger, also known as spekk-finger (a word that means "blubber" in Norwegian), is caused by the bacteria Mycoplasma phocacerebrale.

Usually, infections happen to people who handle seal pelts or seal meat, and to people who are bitten by seals or sea lions, according to a 2009 report published in the Canadian Journal of Plastic Surgery.

If seal finger is left untreated, it can cause a severe infection that makes it hard for people to use their hands, according to the 2009 report. M. phocacerebrale can cause a bacterial skin infection known as cellulitis, in which the skin becomes swollen, red and tender. The infection then progresses to joint damage. In some cases, people need to have their fingers amputated, the report said.

In an interview with CBC News, the girl's father described what happened that day, saying that the incident involved feeding the animal. However, the girl's father, identified only by the last name of Lau for privacy reasons, said it wasn't his family, but other people who were trying to feed the sea lion, he told CBC News. But he did admit that his daughter had been too close to the wild mammal. [10 Deadly Diseases That Hopped Across Species]

Marine biologists have voiced concerns about feeding or pretending to feed wild animals, especially large carnivores such as California sea lions, which can weigh up to 800 lbs. (360 kilograms) and measure an average of 7 feet (2.1 meters) long, according to Sea Lion World.

Lau also praised the girl's grandfather for his quick actions.

"If he had 1- or 2-second doubt about that, my girl could have been gone by then," the father said. "That reaction makes him a hero."