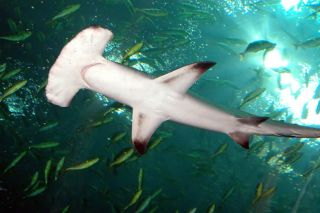 A hammerhead shark has wide-set eyes that give it a 360 degree view and stereo vision, which improves depth perception. Image
(Image: © dreamstime)

Scientists have long wondered why the hammerhead shark has such a strangely shaped head, one that looks like two heads of a hammer protruding from the sides of the shark's snout, with an eye at the outer edge of each protrusion.

Researchers long figured the bizarre shape had something to do with an adaptation for better vision.

"One of the things they say on TV shows is that hammerheads have better vision than other sharks," said study team member Michelle McComb from Florida Atlantic University. "But no one had ever tested this."

McComb and colleagues caught wild sharks of various types and rushed them to a lab, then tested the field of view in each shark's eyes by sweeping a weak light in horizontal and vertical arcs around each eye and recorded the eye's electrical activity.

Hammerheads "have outstanding forward stereo vision and depth perception," the scientists write in the Nov. 27 issue of the Journal of Experimental Biology.

Stereo vision, which humans have, means each eye gets a slightly different view of an object, which improves depth perception. Many sharks have eyes on the sides of their heads that don't allow for stereo vision.

The scalloped hammerhead shark had a "massive binocular overlap" of 32 degrees in front of their heads, three times that of pointy nosed sharks. The overlap is even greater when head and eye movements were factored in.

The T-shaped hammerhead configuration also allows the sharks to see 360 degrees, with "respectable stereo rear view, too," the researchers conclude. "They have a full 360-degree view of the world."