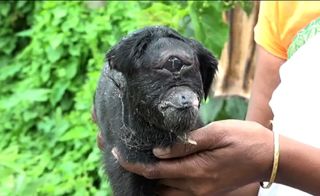 A woman shows a single-eyed goat, born in northeastern India on May 10, 2017.
(Image: © Rima Sharma/Barcroft)

A goat with one large eye in the middle of its forehead — a rare birth defect known as cyclopia — was born in a village in Assam, India, on May 10.

Cyclopia is a severe form of a disorder called holoprosencephaly, which emerges during fetal development when the brain doesn't divide into two distinct hemispheres. A fetus with cyclopia fails to develop two eye cavities, instead forming a single central eye cavity that can contain one oversize eye or two partially fused eyeballs.

Other defects usually accompany cyclopia. The young goat has only one complete ear, lacks a true nose, eyelids and eyelashes, and has jaws that are unusually small and missing teeth, causing the tongue — which is a normal size — to stick out on one side, YouTube channel Barcroft Animals reported in a video about the "Cyclops."  [Rumor or Reality: The Creatures of Cryptozoology]

The term "Cyclops" originated with the Greek "Kuklōps," which means "round-eyed," and referred to a mythological race of one-eyed giants sired by the Greek ocean god Poseidon. Fossil discoveries of dwarf elephant skulls may have fueled myths of the monstrous Cyclops — the large nasal opening in the center of the pachyderm's skull could have been interpreted as the cavity for one enormous eye, the American Museum of Natural History explained on its website for the exhibit "Mythic Creatures."

Another goat with cyclopia ― that lived only 10 hours after birth ― was analyzed by scientists in a study published in 2014, in the Alexandria Journal of Veterinary Sciences. Researchers scanned the goat's head with computer X-ray tomography (CT) and conducted a necroscopy (animal autopsy). Like the goat born a few days ago, it had reduced and malformed jaws, and no nose, eyelids, eyelashes or upper teeth. The orbital opening, which held a single eyeball, measured about 1.2 inches (3 centimeters) in diameter.

In 2011, a fetal shark with cyclopia made headlines after it was cut from the belly of a pregnant dusky shark captured in the Gulf of California. Scientists who examined the animal reported that its single large eye was made up of functional optical tissue, but they said it likely wouldn't have survived had it been born.

It is unclear what causes cyclopia, though scientists have suggested it may be linked to toxins produced naturally by pregnant mothers, according to a study published in 1998 in the journal Science. Excessive leves of the toxins inhibit cholesterol's movement within a developing embryo, disrupting a signal that shapes a number of body parts in a growing fetus, including its face and brain, the study authors wrote.

Though rare, cyclopia has been reported in a variety of embryonic and newborn animals, including buffalo, cows, goats, sheep, deer and even humans, according to a study published in 2015 in the journal Clinical Medical Insights: Pediatrics.

In humans, cyclopia affects an average of one in every 100,000 births, the study authors reported. In all species, those born with these severe defects typically don't survive for long — the researchers of the 2015 study described the condition as "incompatible with life."

But for now, against all odds, the Cyclops Kid is still going strong.