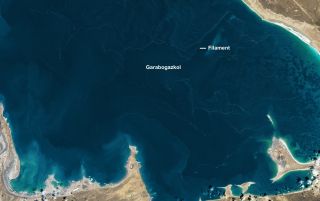 An image taken on April 4, 2017, by the imager aboard the Landsat 8 satellite shows lines of foam that formed in the shallow lagoon called Garabogazköl in Turkmenistan.
(Image: © NASA Earth Observatory)

Glistening threads that look like dainty cracks in a blue-hued glass can be seen snaking across a shallow lagoon near the Caspian Sea in a new satellite image. These "cracks" are enormous strands of foam that appear to be about 100 feet (30 meters) long.

The image, captured on April 4 by the Operational Land Imager on NASA's Landsat 8 satellite, shows a portion of the Garabogazköl lagoon in Turkmenistan. A narrow channel connects the shallow lagoon to the Caspian Sea, the Garabogazköl's only source of freshwater, according to NASA's Earth Observatory.

The foam is the result of surfactants (think dish soap) in the water that get churned up by the wind or other processes to form foamy bubbles, according to Kim Martini, a physical oceanographer at the Joint Institute for the Study of the Atmosphere and Ocean at the University of Washington in Seattle. "In the lagoon in the image, the surfactants could be broken-down algae or [could] come from a terrestrial source, or in some limited cases, pollution," Martini said. [Earth from Above: 101 Stunning Images from Orbit]

As for how the foam got bunched up into these meandering structures, Martini suggested the water beneath them may be the culprit.

"Lines of foam form where you have convergent currents, when water gets pushed together at the surface," Martini told Live Science in an email. "The water has nowhere to go, so it goes downward (downwelling). But the foam and other floaty bits at the surface are too buoyant to follow the water, so they just bunch up into the lines you see at the surface."

The foamy chain could last "until surface-wave and wind action disperse them, which could take a couple of hours or a couple of days," Martini said.

At one point in the history of the lagoon, which is also called Kara-Bogaz Gol or "lake of the black throat" in Turkish, the water completely disappeared. That happened in 1980, when the Soviet Union built a dam blocking water between the Caspian and the lagoon, according to research published in 2006 in the journal Quaternary International. Shortly after that, however, high water levels in the Caspian Sea led officials to release water back into the lagoon. Then, in 1992, the dam was taken down, according to the Earth Observatory.

The Landsat 8 satellite was launched on Feb. 11, 2013; it images the entire Earth every 16 days, according to NASA.