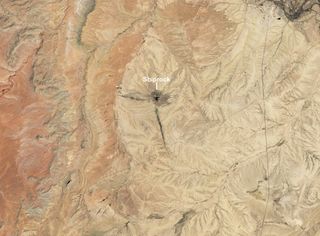 Shiprock, a stunning rock formation in New Mexico, stands out even from space. This image was taken April 12, 2017, by an instrument aboard NASA's Landsat 8 satellite.
(Image: © NASA Earth Observatory)

Shiprock thrusts up from the surrounding New Mexico desert without warning. It's no wonder this abrupt landform is the center of a Navajo legend involving a giant bird that turned to stone — it's impossible to look at the sheer cliffs without wondering what created them.

A new view of Shiprock from space offers a few hints. Leading toward the rugged rock formation in San Juan County is a dark dike, a part of the volcano that created the 1,969-foot-tall (600 meters) cliff formation.

The formation is on Navajo Nation land and is known as Tse Bit'a'i, or "winged rock" in Navajo, according to the New Mexico Bureau of Geology and Mineral Resources (NMBGMR). Legend holds that the rock was Earth that became a bird and carried the Navajo people to the desert on its back, settling down and turning to stone again after the journey, according to Atlas Obscura. Navajo tradition holds that people should not climb or disturb the rocks, so they have been closed to recreation since the 1970s. [Earth from Above: 101 Stunning Images from Orbit]

Geologically, Shiprock originated from a volcanic eruption about 30 million years ago, according to the Bureau of Geology and Mineral Resources. At the time, the rocks were up to 3,280 feet (1,000 m) below the ground and formed the "neck" of a region of volcanic rocks that has otherwise eroded away. The formation is made from a potassium-rich magma called "minette," according to the bureau, and is heavily fractured into a type of angular fragmented rock called breccia. While the surrounding rock has eroded away, Shiprock and some of its accompanying lava dikes remain.

The new image of Shiprock was taken by the Operational Land Imager on NASA's Landsat 8 satellite on April 12, 2017.