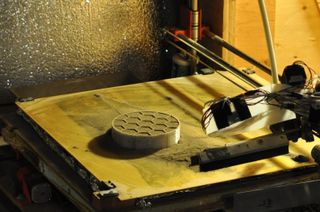 The first printing segment of NASA's 3D-Printed Habitat Challenge is now complete, and the U.S. space agency has awarded $100,000 to the two winning teams.

Based on a points system, the "Phase 2: Level 1 Compression Test Competition" winners are Foster + Partners | Branch Technology of Chattanooga, Tennessee (awarded $85,930), and the University of Alaska, Fairbanks (awarded $14,070), NASA officials said in a statement.

Through a partnership with both NASA's Centennial Challenges program and Bradley University in Peoria, Illinois, the 3D-Printed Habitat Challenge aims "to foster the development of technologies to manufacture a habitat using local indigenous materials with, or without, recyclable materials," NASA officials wrote in the statement. [3D Printing in 10 Ways 3D Printing Will Change Space Travel]

When humanity eventually becomes an interplanetary species, settling on Mars and beyond, people will need to use the resources that are locally available as building material for habitats, agency officials have stressed. It would be expensive and unsuitable to ship building materials all the way from Earth, after all.

Space industry experts also hope that the 3D-printing technologies developed for space exploration may also be used on Earth in the near term, for building shelters in regions where construction materials are in short supply. By setting up competitions, NASA hopes to attract "citizen inventors" from diverse backgrounds to develop 3D-printing technologies for space exploration.

Phase 2 comprises three subcompetitions, the first of which was this "Compression Test Competition." For this competition, teams were asked to develop 3D-printable materials and to 3D print a truncated cone and a cylinder. Judges then carried out lab tests on the samples and determined a score based on a points system.

"Seeing tangible, 3D-printed objects for this phase makes the goals of this challenge more conceivable than ever," Monsi Roman, program manager of Centennial Challenges, said in the same statement. "This is the first step toward building an entire habitat structure, and the potential to use this technology to aid human exploration to new worlds is thrilling."

Next, the teams will be tasked with 3D printing a beam that could be used in habitat construction as part of the "Phase 2: Level 2 Beam Member Competition." Once again, the samples will be tested and judged on a points scale.

In addition to the winners, the other participating teams are Bubble Base of Winston-Salem, North Carolina; Pennsylvania State University of University Park; CTL Group Mars of Skokie, Illinois; ROBOCON of Singapore; and Moon X Construction of Seoul, South Korea.