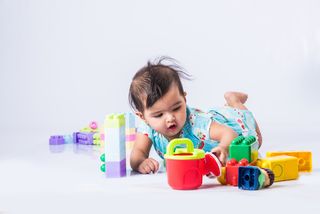 It seems that researchers can't agree on how humans categorize and name colors.

So now, in a new study — the most comprehensive of its kind to date — scientists recorded infants' reactions to familiar and new colors.

Some languages have no words for colors at all, while other languages have many words to describe one color. Researchers have debated whether this difference suggests that culture helps to distinguish turquoise from green, for example, or whether the human brain makes a distinction between those colors long before it understands language.

The new findings indicate that babies can discern five different color categories — red, blue, green, purple and yellow — which suggests there is a biological basis for categorizing color that's independent of language. [10 Things You Didn't Know About the Brain]

The ability to categorize is fundamental to cognition and human survival, and color has long been a useful testing ground for looking at the broader questions about how the human mind sorts information, said Anna Franklin, a professor of visual perception and cognition at the University of Sussex in England and a co-author of the paper, published today (May 8) in the journal Proceedings of the National Academy of Sciences.

"If you can't group things into categories, the world would be a very confusing place," she said.

One area of agreement on both sides of the debate arose from the World Color Survey, which was initiated in the late 1970s by Brent Berlin and Paul Kay of the University of California, Berkeley. Berlin and Kay found that 320 colors named by speakers of 110 non-industrialized languages clustered around particular categories. For example, speakers grouped certain colors as "warm" and others as "cool."

"Even though languages differ, they seem to be working from a common template," Franklin said.

Enlisting infants for cognitive experiments is useful, because babies are unlikely to have developed communication skills and language to discern one color's name from that of another.

Although previous studies had tested babies' responses to some colors, none had performed a systematic study of the full color spectrum on infants.

Franklin and her team used a tried-and-tested technique called novelty preference, which is common in infant science. [11 Facts Every Parent Should Know About Their Baby's Brain]

With this technique, a researcher familiarizes an infant with an object and then, after some time, simultaneously presents the infant with the familiar object alongside something new. A camera and tracking software measure how long the infant stares at the new object, which indicates whether the baby sees the new object as familiar or unique. A baby will spend much more time looking at an object he or she considers novel, as opposed to one that is familiar.

Using this technique, Franklin and her colleagues familiarized 179 babies ranging from 4 months to 6 months old with a particular hue, such as blue. Then, after less than a minute, the researchers presented the baby with a familiar color alongside a new color, such as green. If the baby lingered on green, the researchers considered it novel for the baby.

Sometimes, the familiar hue was shown alongside a new color, and the baby would look away after a short time. That meant that the baby did not think that the new color was novel.

Each baby saw two hues, with different groups of babies seeing different hue pairs. In total, the scientists showed 14 hues of equal lightness, chosen from slices of the color wheel evenly spaced from one another. In the end, the researchers concluded that the babies were able to discern five color categories: red, yellow, green, blue and purple.

Because the implications of this research affect many areas of science — including linguistics, anthropology, computational science, cognitive psychology and philosophy — Franklin hopes it will push the conversation to the next level.

Franklin said she hopes the finding will help researchers gain "a more comprehensive idea of how biology, culture and language interact."