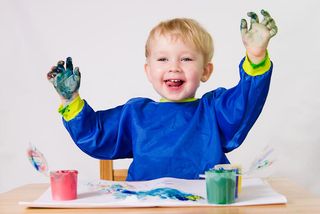 By the time we can talk, we are in the midst of learning the names of colors. And it turns out, whether we have a name for red can be predicted by whether we have names for black and white, colors whose wavelengths are easier for the human eye to discern.
(Image: © greenland | Shutterstock)

The order in which colors are named worldwide appears to be due to how eyes work, suggest computer simulations with virtual people.

These findings suggest that wavelengths of color that are easier to see also get names earlier in the evolution of a culture.

A common question in philosophy is whether or not we all see the world the same way. One strategy that scientists have for investigating that question is to see what colors get names in different cultures. Intriguingly, past research has found that colors familiar to one culture might not have names in another, suggesting different cultures indeed have distinct ways of understanding the world.

One mystery scientists have uncovered is that color names always seem to appear in a specific order of importance across cultures — black, white, red, green, yellow and blue.

To solve the puzzle of this color-name hierarchy, Tria and her colleagues devised a computer simulation with pairs of virtual people, or "agents," who lacked the knowledge of names for colors. One agent, the speaker, is shown two or more objects, invents a name for a color to describe one of the objects, and refers to the item by that color. The other agent, the hearer, then has to guess which item, and thus color, the speaker referred to. Scientists repeated this until all the agents came to a consensus on color names.

A key feature of this simulation was its adherence to the limits of human vision. Our eyes are more sensitive to some wavelengths of light, or colors, than others. The agents in the simulation were not required to distinguish between hues that a human eye could not tell apart.

"Roughly speaking, human eyes can tell apart two colors only if their wavelengths differ at least by a certain amount — the 'just noticeable difference,'" Tria said.

The researchers found the time agents needed to reach consensus on a color name fell into a distinct hierarchy — red, magenta-red, violet, green-yellow, blue, orange and cyan, in that order. This hierarchy approximately matches the color name order seen in real cultures. This hierarchy of colors also matches the limits of human vision, with the human eye being more sensitive to red wavelengths than those for blue, and so on.

"Our approach suggests a possible route to the emergence of hierarchical color categories," Tria told LiveScience. "Humans tend to react most saliently to certain parts of the spectrum, often selecting exemplars for them, and finally comes the process of linguistic color naming, which adheres to universal patterns resulting in a neat hierarchy."

Tria and her colleagues Vittorio Loreto and Animesh Mukherjee detailed their findings online today (April 16) in the Proceedings of the National Academy of Sciences.