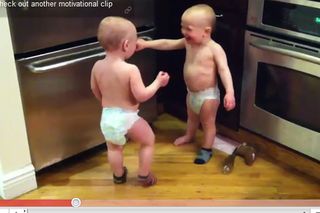 A Youtube video showing two 17-month-old twins chatting and laughing with one another has gone viral in the past two days, with many blogs speculating on what the babies might be discussing. A report on ABC News suggested they're speaking a "secret twin language" all their own. But have these twins really created their own secret language from nothing? [See the video]

One language development expert says no. Like most twins who communicate what appears to be high-level language, they're not actually speaking a private language of their own creation. But the toddlers do provide many insights into how children learn to communicate.

"These two adorable 17-month-olds show in an exaggerated way something that most children show, but usually not nearly so developed," said Virginia Valian, the head of the Language Acquisition Research Center at Hunter College in New York. "The reduplication of babbling — all that 'da da da' business — is very common. Among hearing children, it's universal, though most children don't do it quite to that extreme," Valian told Life's Little Mysteries, a sister site to LiveScience.

But the brothers aren't conveying actual information through a secret language. "They're saying just as little as we would mean if we said 'da da da' to each other," Valian said. Rather they are imitating conversation in a highly detailed manner, and are very advanced in their grasp of conversational structure. "They almost never interrupt each other; if you watch it, they very seldom overlap in their turn taking. They look at each other. Even their gestures are in synchrony," she said.

Most remarkable of all is that the two boys sound like they're speaking, with all the intonations, rhythms, and stresses used by adults in conversation. Together, those aspects of speech are called prosody, and they vary from one language to another. Babies begin learning the prosody of their parent's language while still in the womb.

"Studies have shown that even babies who are just 24 hours old can distinguish between their language and a language that is prosodically different from theirs," said Valian. "A baby born into an English-speaking environment, for example, can distinguish between English and French. This is because babies do a lot of analysis in the womb of the patterns of the language."

Most children learn to express themselves using the particular prosody of their parents' native language by the age of 10 months. "You can play a clip of a 10-month-old babbling and ask [English-speaking] people whether it's English or some other language, and above chance, even though there are no words yet, people will be able to say 'that's English,'" said Valian.

As for the two YouTube boys, their zest for conversation stands out. "They're really having a good time and they will pretty soon start talking," Valian said. "I hope their parents keep taping them because it will be interesting to see them start replacing the babbling with actual words."