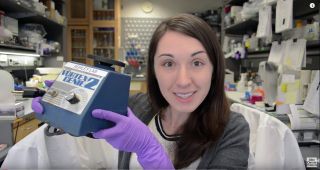 YouTube producer/host and genetics researcher Alex Dainis holds one of the tools of her trade.
(Image: © YouTube)

In this series of articles, Live Science focuses the spotlight on some of YouTube's most popular science channels. Their creators weave together graphics, footage, animation and sound design in videos that can be as whimsical as they are informative, employing a range of techniques and styles. Yet all of them share a general curiosity and enthusiasm for the unexpected and fascinating science stories that exist in the world around us.

If you've ever wanted to peek behind the scenes at the day-to-day activities in a genetics laboratory — there's a YouTube channel for that.

Vlogger and doctoral candidate Alex Dainis invites YouTube audiences into her lab at Stanford University, offering an insider's view of her journey as a graduate student training to work in the field of genetics.

Dainis — who told Live Science that she loves talking about science "to anyone who will listen" — uses her videos to share her affinity for cool science stories, to express her own considerable sense of wonder and excitement about all things related to genetics, to show how experiments are conducted in a lab, and to introduce scientists as real people, presenting "what we do and what our daily lives are like," she said. [The Most Interesting YouTube Science Channels]

Asking questions about the world

Storytelling and science both hold equal fascination for Dainis, who worked in film production before attending graduate school at Stanford. But as much as Dainis enjoyed the moviemaking process, "I missed talking about science," she said. YouTube provided an outlet where she could bring the two together, and in 2012 she began posting short explainer videos describing interesting science stories and "fun facts," she told Live Science.

Her "Bite-Sci-zed" video nuggets of science are short — each just a few minutes long — and delve into diverse topics such as the spectrum of egg colors, what naked mole rats can teach us about cancer, periodical cicadas and their exoskeletons, and the genetics of seedless watermelons.

However, once Dainis began her graduate studies, she decided to take her YouTube channel in a more personal — but still science-infused — direction, producing videos that would share her daily experiences in the genetics lab as a doctoral candidate.

In the video series "What Is This Thing?" Dainis acquaints her audience with the common tools of her trade — and a few uncommon ones. These laboratory items, which many non-scientist viewers are likely seeing for the first time, are an intrinsic part of genetics research, and Dainis' straightforward descriptions dispel some of the mystery surrounding how scientists sequence DNA and make the science more accessible.

She cheerfully introduces pipettes (syringe-like tools used to measure and move liquids), a hemocytometer (used for counting cells) and ethanol lamps — a heating alternative to gas-powered Bunsen burners; Dainis said in the video that using them "makes me feel like I'm doing science on an old-fashioned whaling ship."

Another recent video documented something a little out of the ordinary in the life of a graduate student — analyzing DNA with an astronaut, and exploring how NASA scientists can use genetic sequencing to monitor astronauts' health in space, and to search for extraterrestrial life.

"Sometimes it's really exciting and sometimes it's monotonous — this is what science is, and I want to show a realistic picture of that," Dainis said.

And sometimes while making the videos, Dainis herself learns a thing or two. The chance discovery that nectarines were actually a type of mutant peach inspired Dainis to take a closer look at the genetics of the two fruits, resulting in "one of the coolest videos I did," Dainis told Live Science.

"Peaches and nectarines are actually the same fruit but with a single recessive allele difference," she said.

"I got to use some techniques in the lab that I use every day, and I got to show something very cool about a fruit that I had never considered before. That was so exciting. I was eating these fruits for years, and I had no idea they were the same thing!"

Her videos attract viewers representing a range of ages and professions, but the common threads running through all of them are fascination with science and curiosity about how it's done.

"I get comments from people all around the world; from middle-schoolers, from people thinking about careers in science, people who've been scientists for decades, and some people who're not in science but are interested in the process. They're in different stages of their careers, different walks of life — I think it's very exciting that this community of science nerds has bloomed around these videos," she said.