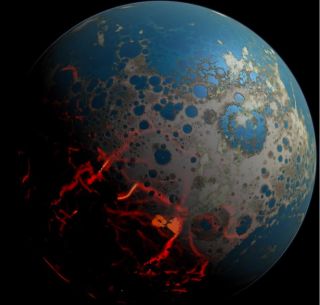 An artistic conception of the early Earth.
(Image: © Simone Marchi/NASA/SwRI)

One of the still-unsolved mysteries about Earth's history is how the planet became oxygenated, and breathable, billions of years ago. Now, a new study says the culprit may have been the giant rock slabs that make up the Earth's outer shell.

As these so-called plates moved, in a process called plate tectonics, they would have buried carbon-rich remains of dead creatures beneath other plates as they slid underneath. In the Earth's mantle, under the crust, the carbon wouldn't be able to react with oxygen, leaving this vital ingredient in the atmosphere, the scientists said.

Until the Great Oxygenation Event, the planet's atmosphere was a mix of nitrogen, carbon dioxide, water vapor and methane. Then, 2.5 billion years ago, a class of single-celled creatures started using that carbon dioxide and producing oxygen as a waste product. But oxygen is highly reactive; reactions with surface rocks and carbon seeping from the remains of dead organisms would quickly deplete the element. [The 8 Biggest Mysteries of Planet Earth]

The new study by Megan Duncan and Rajdeep Dasgupta at Rice University in Texas posited that the carbon from the dead creatures got pushed under the Earth's crust, or subducted, to form graphites and ancient diamonds. As such, the duo said, the Great Oxygenation Event was, in part, driven by the start of "modern" plate tectonics, in which the Earth's crust is divided into huge plates that collide, jostle, and slide over and under one another.

The process was efficient enough that the carbon didn't have time to react with the oxygen, so the oxygen — the waste product of all those early creatures — stayed in the atmosphere and accumulated to near the levels seen today. The result: an atmosphere amenable to future oxygen-breathers. [Photo Timeline: How the Earth Formed]

"This work started by considering processes that happen in subduction zones today," Duncan told Live Science. "And then [we continued by] wondering what happened in the ancient subduction zones."

Duncan used a computer model of the atmosphere showing a reaction between carbon dioxide and water. When the two react, they make molecular oxygen (made up of two oxygen atoms) and formaldehyde (a compound made up of carbon, hydrogen and oxygen). The formaldehyde isn't necessarily what living creatures would actually produce; it's a stand-in for more complex organic carbon compounds, Duncan said.

Ordinarily, that reaction is balanced; the oxygen cycles back to make more carbon dioxide (CO2) and water, leaving an atmosphere devoid of oxygen. That's where the plate tectonics come in, the researchers said. According to the new study, the jostling plates pushed all the formaldehyde underground, leaving the air with more oxygen. Meanwhile, without the formaldehyde driving the "balanced" chemical reaction, extra CO2 would remain in the atmosphere, helping the CO2-breathers to thrive and produce even more oxygen as waste, the researchers found in their computer model.

To check their hypothesis, the researchers used both older measurements of carbon in the ancient crust and lab experiments. In some ancient diamonds, for example, there's a certain amount of carbon-13, a carbon isotope found in tissues of living organisms. That data showed that some amount of organic carbon clearly made it into the mantle (beneath Earth's crust), the researchers said.

The next question was whether the carbon would stay there. Duncan melted a piece of silicate glass and added graphite to it. The glass simulated the ancient crust, and the graphite represented the carbon from organisms, Duncan said. She then increased the pressure and temperature, starting at some 14,800 atmospheres of pressure and increasing it to 29,000 atmospheres (that's some 435,000 pounds per square inch). The results showed that carbon could dissolve in rock under the conditions likely present in early Earth's mantle, the study said. The result also showed that the carbon was likely to stay under the crust for millions of years before volcanoes burped it out again, the study said.

Pinning down the exact mechanism for the Great Oxygenation Event isn't going to be easy, Duncan said, and likely it involved several mechanisms, not just one. One challenge is the timeline of when subduction started, she said.

"If the modern plate tectonic processes have always been in action, this doesn't work," Duncan said. Other lines of evidence seem to show that early Earth might not have had plate tectonics initially and that the process started later, Duncan added.

The problem is putting exact limits on how much and how fast, she said.

Tim Lyons, a professor of biogeochemistry at the University of California Riverside, agreed that linking this model to the known record in rocks is a challenge. "One of my questions is whether those data can be tied to a robust record for the history of subduction," Lyons said.

"There have been many mechanisms proposed to cause the GOE [Great Oxygenation Event]; none, on their own, can re-create the magnitude of O2 [oxygen] increase that is observed from the record," Duncan said. "It was likely a combination of many of these mechanisms, including subduction, that allowed O2 levels to rise and be maintained for the rest of Earth's history."

The study appeared (April 25) in the journal Nature Geoscience.