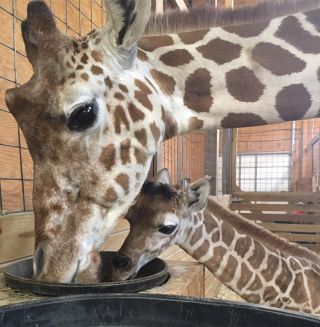 April and the still-to-be-named calf will likely be back in the limelight in upcoming months.
(Image: © Animal Adventure Park)

After two months of documenting April the giraffe's pregnancy — not to mention the baby's birth and its first days of life — the Animal Adventure Park (AAP) "giraffe cam" has finally come down.

How will her millions of fans cope? They will probably be relieved to hear that the park isn't pulling the plug on April's internet career just yet.

The continuous live feed officially ended April 21, with AAP owner Jordan Patch and April's caregivers filming a video farewell from the giraffe barn in Harpursville, New York, and sharing it on Facebook at 4:30 p.m. local time. In the video, Patch thanked viewers for joining them on their journey with April, adding, "It's not over — it's just the end of the first chapter." [Giraffe Birth Captivates Over 1 Million Viewers |Video]

"We know the giraffe cam will be missed by many, but we assure you there will be many other ways to keep up with April, Oliver and their calf, and we will keep you updated on those opportunities," Patch said in a statement.

"We are eternally grateful for every person that tuned in and shared a part of their lives with all of us at Animal Adventure Park," he added.

Text and image updates of April and her baby will still be posted on Facebook, along with Facebook Live video chats. Additional photos and video will be available exclusively to text subscribers through May 31, according to the statement.

And after the park opens for the season on May 13, a permanent yard cam will be installed to reunite internet viewers with everyone's favorite giraffe family, AAP representatives confirmed on Facebook.

During the video's last days, viewers noted that the calf often wasn't visible. His caregivers explained that the youngster liked to sit in a quiet corner of the pen, "inconveniently out of camera view!" they said on Facebook.

For now, the calf — a male — is still nameless, but members of the public can submit suggestions for names online at a cost of $1 per vote, with a minimum of five votes required. Currently, the top 10 names, in no particular order, are Unity, Patches, Apollo, Patch, Peter, Harpur, Geoffrey, Noah, Ollie and Allysa's Choice, AAP representatives posted on Facebook. Voting is open for one more week, with the announcement of the baby's name tentatively scheduled for May 1.