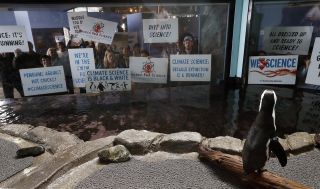 Science advocates around the world turned out in droves to take part in the March for Science over the weekend, and the demonstration even found support from members of the animal kingdom: African penguins at the Monterey Bay Aquarium in California took part in a mini March for Science, waddling around in support of the cause.

The "March of the Penguins for Science," as the aquarium called it, included five African penguins taking an "enrichment walk" with staff and volunteers joining in. Some of the onlookers held signs, including ones saying, "Science gives us happy feet," and "Honk honk, bray bray, African penguins are here to stay." [In Photos: The Best Signs from the 2017 March for Science]

African penguins (Spheniscus demersus) are an endangered species, according to the International Union for Conservation of Nature (IUCN) "Red List" of threatened species. The IUCN notes that these penguins have experienced a very rapid population decline due to commercial fishing and changes in the birds' prey populations.

"Of course, the birds appreciate all the science that's done around the planet to figure out how to best help them," an aquarium representative who narrated the video said. "In particular, 'climate science: because extinction in a bummer' [as one sign read]."

The Facebook video of the penguins waddling in solidarity had more than 2.6 million views by this afternoon (April 24).

On Saturday (April 22), tens of thousands of people joined the March for Science on Earth Day, a global movement that brought scientists and science advocates onto the streets to convey how important science is to the health and safety of the planet's inhabitants.

Organizers of the global March for Science movement said the event was a first step "to defend the vital role science plays" in all aspects of life. While the march represented all sciences, one aspect of the movement was protesting the U.S. government's elimination of environmental protections and initiatives to mitigate climate change.

In his proposed 2018 budget, President Donald Trump put forward a plan to make unprecedented cuts to the sciences. The largest proposed cut was to the Environmental Protection Agency's budget, a 31 percent reduction from current funding levels. This proposed cut would remove programs such as Energy Star (which helps consumers find energy-efficient products and buildings) and Targeted Air Shed Grants (which help limit pollution at the local level).