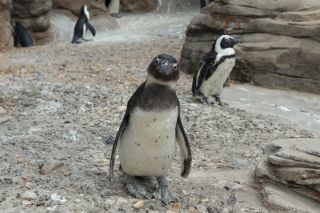 African penguin chicks appear darker than the adults and parents in their colonies. It takes several years for the chicks to molt into their adult plumage.
(Image: © © Julie Larsen Maher, WCS)

David Oehler is curator of ornithology at the Wildlife Conservation Society (WCS)'s Bronx Zoo. Julie Larsen Maher is staff photographer for WCS, the first woman to hold the position since the society's founding in 1895. The authors contributed this article to Live Science's Expert Voices: Op-Ed & Insights.

Penguins are found in the Southern Hemisphere in all shapes and sizes. But today, they are in trouble. They depend on the oceans for food and need coastal areas to nest, rear their young and molt. Sadly, close to two-thirds of the world's 17 penguin species face population pressures from threats like overfishing, oil spills, and man-made changes to the birds' environment.

Fortunately, there are several things people can do to help protect penguins:

For more on penguins, see the gallery below.

Consistent with their moniker, "little penguins" are the smallest of the 17 penguin species, at 13 inches (33 centimeters) in height. They are also known as blue penguins due to the indigo sheen of their feathers. They are currently threatened by predators like foxes and dogs, which have been introduced to these penguins' home ranges in Australia and New Zealand. (Credit: © Julie Larsen Maher, WCS.)

Rockhoppers sport spiky black and yellow crests of feathers that adorn the tops of their heads. These are among the smallest penguins, at about 22 inches (56 cm) tall. Their numbers have plummeted in the last century as their food supply in South America has become scarce. (Credit: © David Oehler, WCS.)

Magellanic penguins return to the same burrows year after year in Argentina, Chile and the Falkland Islands, leaving in the winter. The female lays two eggs, on a nest in the burrow, and both parents take turns incubating them. (Credit: © Julie Larsen Maher, WCS.)

Downy feathers cover newly hatched Magellanic penguin chicks. As a penguin grows and its feathers come in, a juvenile chick will have a combination plumage of both down and adult feathers that resembles a mohawk haircut. (Credit: © Julie Larsen Maher, WCS.)

Chinstrap penguins are found in Antarctica and the world's other southernmost islands. These birds are distinguished by the feather markings on their heads that look like helmets held in place with a chinstrap, thus the penguins' name. Changing ocean conditions affect their main food source, krill. (Credit: © Julie Larsen Maher, WCS.)

Recently hatched chinstrap chicks are covered in light-colored down that is not waterproof. Their first month is spent tucked under their parents in nests made of stones. (Credit: © Julie Larsen Maher, WCS.)

Penguins are social animals that live in colonies, like this one of chinstrap penguins. They have complex courtships that include noisy vocalizations. (Credit: © Julie Larsen Maher, WCS.)

King penguins are the second largest of the penguin species, standing nearly 3 feet (0.9 meters) tall. These king penguins from Chile look to be dressed for success in their formal black and white feathers and distinctive, bright-orange throat feathers. (Credit: © David Oehler, WCS.)

The African penguin is also known as the black-footed or jackass penguin. That last alternative name comes from the donkeylike braying sound these birds make. This species is found on the southwestern coast of Africa, from Namibia to South Africa. African penguins grow to 27 inches (69 cm) in height. (Credit: © Julie Larsen Maher, WCS.)

African penguin chicks appear darker than the adults and parents in their colonies. It takes several years for the chicks to molt into their adult plumage. (Credit: © Julie Larsen Maher, WCS.)