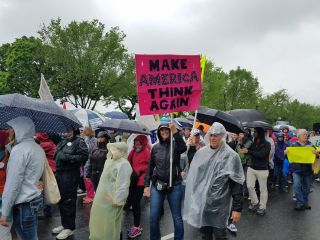 "Make America think again!" "We need data!" "Nerd power!" "Fund science, not the wall!" These were just some of the chants heard during the March for Science today (April 22) in Washington, D.C., and across the globe.

Scientists and science enthusiasts (along with their curious kids) turned out in droves to make their voices heard. Though their signs were diverse — from "I'm with Her [mother Earth]" to "Grab 'em by the hypothesis" — the central message seemed to be the idea that science is important to everyone and must inform decision-making at the highest levels of government.

"I spoke with scientists that do research on astronomy, biology, chemistry, health, physics, all with one voice for the importance of science for society," said Cristian Samper, President and CEO of the Wildlife Conservation Society who marched in Washington, D.C. [In Photos: The Best Signs from the 2017 March for Science]

The March for Science, which grew out of a Reddit thread back in January and took inspiration from the historic Women's March, spanned cities across the globe. In Washington, pre-march rallies saw the likes of musician Questlove and YouTube star Derek Mueller (of Veritasium) take to the stage in front of the Washington Monument, along with celeb science communicator Bill Nye and more than 50 other speakers. An appearance by Thomas Dolby performing his appropriately named "She Blinded Me with Science" had science marchers jumping around and dancing.

In New York City, the march took place in Manhattan, beginning near Columbus Circle at 71st Street and ending in Times Square, with plenty of signage and chants in support of science. Seventh-grader Talia Levine, 12, who lives just outside New York City, said she was marching "because I really believe in what we're saying here, and I hope Trump can hear us." Levine, who was there with her dad, added, "If I could say one thing to Trump, I would say, 'Think what you're doing, because it's going to affect you eventually.'"

Here are some of the voices from the marches:

"What an inspiring experience," Collette Adkins, a senior attorney at the Center for Biological Diversity, who marched in D.C., told Live Science. "I loved seeing my children's excitement about the crowds of scientists and their creative signs. Science should be the basis for important policy decisions, and I'm glad to see that so many took the streets with that message."

Excitement is part of what science is about, said one marcher in D.C. "I want to remind people that science is fun," said George Goldberg, a scientist at the National Center for Atmospheric Research in Denver, Colorado, who was at a March for Science rally in D.C. "People tend to forget the fun part."

Majorelle added, "It's part of who we are. It's one of the best things that humans have created — it's science."

"I was so impressed by how people stuck with it in spite of the weather," Eric Davidson, president of the American Geophysical Union (AGU) told Live Science. "These scientists are truly dedicated to the pursuit of science for the benefit of humanity. One of the cutest chants I heard was 'we're here, we're wet, and we're upset.' Scientists are finding their voice," said Davidson, who marched in D.C. [6 Politicians Who Got the Science Wrong]

Samper of the WCS agreed. "It was great to see so many people with diverse interests and backgrounds coming together for science," Samper told Live Science. It was a cold and rainy afternoon in D.C., but this did not dampen the enthusiasm of thousands of people that came together."

Some thought the tone was a little more serious than the Women's March.

"In comparison to the Women's March, this one was more serious and somewhat incredulous that this was even an issue," said John Robinson, Chief Conservation Officer for the Wildlife Conservation Society who marched in New York City. "Contrary to some of the news chatter that all scientists worry about is their research money, the dominant sentiment was that science is serious, and that policy should be evidence based not opinion based."