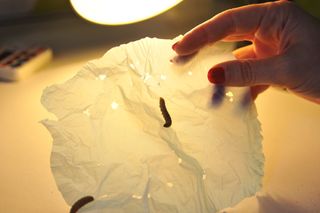 This piece of plastic is quite holey after wax worm caterpillars (Galleria mellonella) spent 30 minutes on it.
(Image: © CSIC Communications Department)

A wiggly, ravenous caterpillar  — one that doesn't limit its diet to naturally grown objects — can biodegrade plastic bags, a material infamous for the amount of time it takes to decompose, a new study finds.

The 1-inch-long (3 centimeters) wax worm, also known as the honey worm caterpillar (Galleria mellonella), is no stranger to unconventional meals. It's usually found in beehives, munching away on waxy, goo-drenched honeycombs, the researchers said.

Now, through a serendipitous discovery, it's clear that G. mellonella can also decompose polyethylene, a thin but tough plastic that is used across various industries, including in shopping bags and food packaging. [7 Everyday Toxic Things You Shouldn't Toss in the Trash]

The discovery happened during a beekeeping experience, said the study's senior researcher, Federica Bertocchini, a research scientist at the Spanish National Research Council (CSIC), who also works at the Institute of Biomedicine and Biotechnology of Cantabria, in Santander, Spain. Bertocchini, who is also an amateur beekeeper, happened upon the wax caterpillars when she was cleaning out the panels from one of her beehives. (Beekeeping panels look like wooden picture frames that are filled with honeycomb.)

"I removed the worms, and put them in a plastic bag while I cleaned the panels," Bertocchini said in a statement. "After finishing, I went back to the room where I had left the worms, and I found that they were everywhere. They had escaped from the bag, even though it had been closed."

Upon closer inspection, she realized that the caterpillars had made holes in the bag before fleeing. "This project began there and then," Bertocchini said.

When Bertocchini and her colleagues placed the caterpillars on polyethylene plastic bags, holes appeared in the bags within an hour, they found. Perhaps the caterpillars can degrade the plastic because it has chemical bonds that are similar to those found in beeswax, the researchers said.

"We have carried out many experiments to test the efficacy of these worms in biodegrading polyethylene," Bertocchini said. "One hundred wax worms are capable of biodegrading 92 milligrams [0.003 ounces] of polyethylene in 12 hours, which really is very fast."

The researchers found that the caterpillars chemically transformed the polyethylene into ethylene glycol. This compound is a colorless and odorless alcohol that has a sweet taste but is poisonous if ingested, according to PubChem, a database at the National Institutes of Health. Ethylene glycol is used as an antifreeze and coolant, PubChem reported.

It's likely that the caterpillars produce an enzyme that can degrade the plastic when they eat it, or when it rubs against them or their chrysalis. The researchers said they hope to detect, isolate and produce it soon on an industrial scale.

"In this way, we can begin to successfully eliminate this highly resistant material," Bertocchini said. [In Photos: Animals That Mimic Plants]

Every year, factories around the world produce about 88 million tons (80 million metric tons) of polyethylene. Although it's used widely — the average person uses about 230 plastic bags annually — the material is slow to degrade. The low-density polyethylene used in plastic bags can take about 100 years to decompose completely, and the most resistant polyethylene products can take up to 400 years to decompose, the researchers said.

G. mellonella, which eventually metamorphoses into a moth, is found all over the world. The caterpillar lives for about six to seven weeks before it spins a silk chrysalis.

However, just because the caterpillar offers a possible way to deal with plastic waste, it's not a reason to continue polluting, Bertocchini said.

"We should not feel justified to dump polyethylene deliberately in our environment just because we now know how to biodegrade it," she said.

The study was published online today (April 24) in the journal Current Biology.