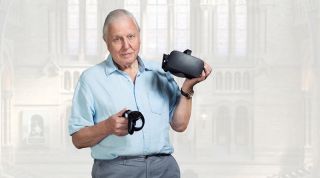 You'll soon be able to take a hands-on tour of London's Natural History Museum with famed naturalist Sir David Attenborough, right from the comfort of your couch.

The new project combines interactive virtual-reality (VR) technology with a TV documentary, in which a hologram of Attenborough takes viewers "behind the glass" at the museum. The VR experience, named "Hold the World," allows users to do just that: have (virtual) hands-on access to fossils, bones and skulls.

According to Sky, the European entertainment company behind the VR experience, the interactive technology will allow users to hold, tilt and peer inside the museum's collection of objects. [6 Spectacular Species Named for David Attenborough]

Along with letting users virtually handle the museum collection, Attenborough's hologram will share facts about each specimen.

"I have enjoyed helping people to discover more about the natural world, and 'Hold the World' offers people a unique opportunity: to examine rare objects, some millions of years old, up close," Attenborough said in a statement. "It represents an extraordinary new step in how people can explore and experience nature, all from the comfort of their own homes, and I am delighted to be able to help users uncover some of the treasures the Natural History Museum has to offer in a thrilling new way."

With production set for later this year, "Hold the World" does not yet have a launch date. Once released, the VR experience will be accessible on Google Cardboard, Samsung Gear VR and the Oculus Rift, Ars Technica reported.

The museum tour will be the first fully interactive production from Sky. However, the entertainment company has announced plans for several other VR film projects and has already released two VR experiences on Formula One racing.

"Virtual reality is all about experiencing things you could only ever dream of in real life," Gary Davey, managing director for content at Sky, said in the statement. "So in this ground-breaking new experience from Sky, people can handle precious dinosaur fossils and delicate insects with a holographic Sir David Attenborough as their guide."