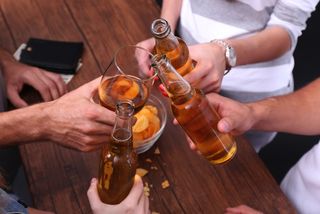 Young adults who are heavy social drinkers may think they have a "tolerance" that lets them drink alcohol without it impairing their coordination, but a new study shows otherwise.

The researchers found that after people who had been heavy drinkers for years consumed a high dose of alcohol, they fared no better than light drinkers when performing a complex task, akin to driving a car.

Previous studies had found that heavy drinkers may develop a behavioral tolerance to alcohol, so that the more experience they have with drinking heavily, the less impaired they may act on some performance measures because their brain learns some ways to compensate on some tasks. [7 Ways Alcohol Affects Your Health]

However, this new study involved a more challenging task that involved more communication between different parts of the brain, according to the findings, published in March in the journal Psychopharmacology.

Although heavy drinkers develop a biological tolerance for alcohol over time — meaning that their bodies can metabolize alcohol faster, and it moves out of their systems more quickly — this new study showed that heavy drinkers were just as impaired as lighter drinkers on a more complex task, said lead study author Ty Brumback, a postdoctoral fellow in addiction treatment at the VA San Diego Healthcare System.

Prior to this study, there had been little evidence to show the effects of repeated episodes of heavy drinking over time on young adults who were social drinkers but not considered to be dependent on alcohol.

To understand these effects over time, the researchers evaluated data from 155 young adults, whose average age was 25. All of them were participants in the Chicago Social Drinking Project, a study that began in 2004 that is investigating the long-term consequences of social drinking on people's health, behavior and lives.

The participants were tested once when the study began, when they were in their mid-20s, and a second time in their early 30s, about five years later. They were given a flavored beverage that contained either a high dose of alcohol or a placebo containing just 1 percent alcohol (to make it taste like alcohol). Then, the participants performed two tasks — a simple one and a complex one — at four time points after they finished their drinks: 30 minutes later, 1 hour later, 2 hours later and 3 hours later.

The simple task was a "fine motor task" that involved using their fingers to move, insert and rotate 25 metal pegs into slotted holes on a pegboard. This required little communication within the brain, Brumback said. Inserting a key into a keyhole is a comparable task to this one in real life, he noted. [11 Interesting Facts About Hangovers]

The second task was a timed test that consisted of matching numbers to symbols. This was more difficult, and required communication across multiple brain regions to accomplish, Brumback said. A comparable task in real life would be driving a car and attempting to follow directions to a new location, he said.

During the study, the participants had their breath alcohol concentrations measured prior to starting the tasks and at frequent intervals throughout the testing session. Twice during the sessions, the participants reported how intoxicated they felt.

When the researchers compared the participants' results on the two tasks done in their 30s to their earlier scores from their 20s, they found that heavy drinkers had improved their performance on the simpler pegboard task over time,andshowed less impairment from alcohol than light drinkers.

But on the more challenging number-and-symbol task, heavy drinkers did not perform better than light drinkers and showed the same degree of impairment as the light drinkers.

Even so, the heavy drinkers still consistently rated themselves as feeling less intoxicated than lighter drinkers, Brumback noted.

Heavy drinkers often believe they can handle alcohol better because they have more practice doing it, and they think their behavior is affected less by drinking than it actually may be, he said. This misconception can lead them to make bad decisions and put themselves — and others — at greater risk of injuries and accidents, Brumback said.

For example, a heavy drinker may accomplish a relatively simple task, such as putting a key into a car ignition and shifting the car into gear, which could make them feel more confident in their ability to get behind the wheel, he said.

But this study demonstrates that alcohol affects a heavy drinker's ability to do a complex task, such as driving, which requires the brain to do continuous mental processing quickly and effectively, Brumback said.