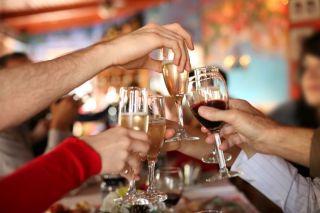 If you think alcohol makes you more charming in social situations, you may want to think again: Heavy drinking may impair the brain's ability to assess and respond to social cues like facial expressions, a new study suggests.

In the study, people who drank alcohol and became intoxicated appeared to have disrupted communication between two brain areas that help interpret social cues.

The findings are preliminary but may suggest why alcohol intoxication is sometimes linked with aggression and social withdrawal, said study researcher K. Luan Phan, a professor of psychiatry at the University of Illinois at Chicago. [Raise Your Glass: 10 Intoxicating Beer Facts]

In the study, 12 college students drank a beverage that was either high in alcohol (16 percent alcohol, or about the amount in a strong wine), or did not have alcohol. They then underwent brain scans with functional magnetic resonance imaging (fMRI) as they attempted to match up pictures of people's faces with pictures showing the same facial expression. The faces showed happy, angry, fearful or neutral expressions.

The brain scans suggested that when participants were intoxicated, the "functional connectivity" — or brain communication between the amygdala and the orbitofrontal cortex — was reduced as they viewed angry, fearful and happy faces. Both of these brain areas are thought to be involved in processing social and emotional information, such as facial expressions.

In people who were not intoxicated, the activity of these two areas was normally synchronous, but in the intoxicated participants, these brain areas were less in sync.

In addition, activity in the amygdala was reduced when intoxicated participants viewed images of angry or fearful faces.

"This suggests that during acute alcohol intoxication, emotional cues that signal threat are not being processed in the brain normally, because the amygdala is not responding as it should be," Phan said in a statement.

However, the study sample was small and involved people who said they were heavy drinkers, so more research is needed to confirm the findings and to see if they apply to individuals who don't drink regularly.

In addition, it's not clear whether the effects seen in the lab translate into the "real world" — although there was an effect in the brain, the researchers do not know whether it would change participants' behavior in a social situation, or change their thinking.

The study is published in the September issue of the journal Psychopharmacology.