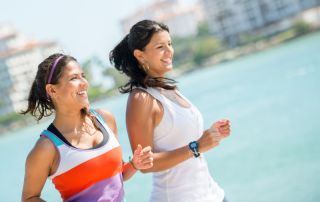 Your friends really do influence your exercise habits, a new study suggests.

Researchers analyzed information from more than 1 million people worldwide who tracked their exercise sessions with fitness trackers for more than five years, and shared their activity with friends over a social network. Collectively, the participants ran more than 350 million kilometers (215 million miles) over the study period.

To figure out how much people are influenced by their friends, the researchers also included a look at the weather: The idea was that friends who live in different cities experience different weather, and bad weather in one city would be expected to influence only the activity of the friend who lived there. So if a Chicagoan skips her run on a rainy day in Boston, this suggests the Chicago friend is influenced by the running habits of friends in Boston.

"We found that exercise is socially contagious," the researchers wrote in the April 18 issue of the journal Nature Communications.

The findings suggest that public health efforts could be improved by tapping into this "friend effect," the researchers said. [7 Ways Friendships Are Great for Your Health]

"New interventions that take into account the fact that there is social influence in 'healthy' behaviors like exercise can be more effective than other ones that do not," said study co-author Christos Nicolaides, a postdoctoral fellow at the Massachusetts Institute of Technology's Sloan School of Management. For example, campaigns trying to promote exercise could be designed to include engagement in a social network, he said.

Previous studies have suggested that certain behaviors are socially contagious, meaning that they spread from one person to others within their social circle. For example, studies have found that when a person becomes obese, his or her friends have an increased risk of becoming obese as well.

However, because so many factors influence people's behavior, it is hard to prove that one person's behavior directly causes a change in a friend's behavior, the researchers said. For example, it could be that two people become obese around the same time because of an outside factor that influences both people in that social network, or because the two friends are already very similar in their behaviors.

In the new study, the researchers addressed this issue of causality by taking advantage of changes in weather to set up a natural experiment, Nicolaides said.

The researchers found that, indeed, the running activity of a person's friends did have a causal effect on the person's activity.

The researchers noted that, because their study involved only people who use fitness trackers, the results may not necessarily apply to the average person who doesn't use a tracker. In addition, although the researchers saw that people shared their data, they did not know if or when other runners saw the data that people had shared. It could be that some runners check their friends' activity much more often and are more influenced by their friends compared with others, the researchers said.

The researchers used data from a global exercise company that allows people to track their activity and follow their friends' activity. But because of confidentially agreements, the researchers cannot release the name of the company that provided the data, Nicolaides said.