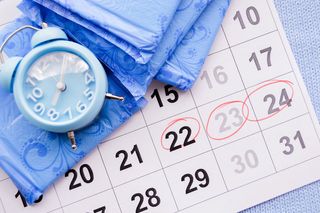 Women's periods don't actually synchronize if they live together, according to a new study from a period- tracking app.

The study, from the period-tracking app Clue, is one of the largest of its kind to look for evidence of menstrual-cycle syncing among women, according to the Guardian.

The idea that women who spend a lot of time together experience an alignment of their menstrual cycles was first examined in 1971 in a study of female college students. That study found that the start dates of women's periods got closer together if the women were roommates or close friends. One hypothesis for the results was that women release pheromones that influence each other's cycles. But the study drew  criticism for using flawed statistical methods, and many subsequent studies have failed to replicate the results. [5 Myths About Women's Bodies]

In the new study, Clue teamed up with researchers at the University of Oxford to analyze data from their period-tracking app. Of the 1,500 women who responded to the study survey, the researchers narrowed it  to 360 pairs of women who used Clue. Each woman said she had some type of close relationship with the other person in the pair — they were friends, siblings, roommates, partners, mother-daughter pairs or colleagues. The researchers only included pairs who lived in the same city as each other, and about one-third of the pairs lived together. Women were excluded from the study if they used hormonal birth control.

This isn't the first study to cast doubt on the idea of syncing menstrual cycles. A 1993 study conducted by researchers at New Mexico State University, which included about 30 lesbian couples, found no evidence of convergence of periods over time. A 1991 study from the University of Missouri, which included 132 sorority members and their roommates, also found that the start dates of the women's periods tended to diverge over time. And a 1994 study of women on an Israeli basketball team found no evidence of menstrual synchrony.

So why do women sometimes say that, anecdotally, they've experienced their cycle aligning with someone else's?

It could simply be chance, according to Beverly I. Strassmann, a professor of anthropology at the University of Michigan. For example, if two women have cycles that are 28 days long, the maximum they could be out of sync would be 14 days, Strassmann wrote in a 1999 opinion paper on the topic published in the journal Human Reproduction. On average, they will be seven days apart, and half of the time their period start dates should be even closer, Strassmann said. And since a woman's period typically lasts at least five days, "it is not surprising that friends commonly experience overlapping menses, which is taken as personal confirmation of menstrual synchrony," Strassmann said.