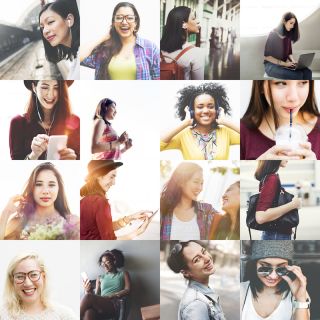 Most profile photos that people choose for themselves — whether it's on Facebook, a dating hub or a career-building site — are not flattering, a new study finds.

But there is hope for profile-picture glory. Simply ask a stranger to look at a few photos of yourself, and ask him or her to select the best one, the researchers said.

White and his colleagues chose to use online profile pictures in their study because the first impression someone has of your face is incredibly important. So, most people want to choose a flattering image of themselves — one that shows the best version of themselves to viewers — but no one had studied exactly how these decisions play out, he said.

To investigate, the researchers examined whether people do, in fact, "put their best face forward" when selecting a profile photo, White told Live Science in an email.

In the experiment's first phase, White asked more than 100 university students to download 12 images of themselves from online galleries, including those from Facebook, Flickr and Instagram. Then, the researchers asked the students to choose images that they would most likely use as profile pictures on the following social networks: Facebook, Match.com and LinkedIn.

Next, the students performed the same task, but for a stranger in the group who was of the same gender.

In the second phase, the researchers used Amazon Mechanical Turk, an online crowdsourcing platform, to invite the people in the study to give their first impressions of these photos. Participants rated each of the chosen profile photos for several social traits, including trustworthiness, competence, confidence and attractiveness.

They found that the participants were able to choose images of themselves that accentuated the trait they wanted to emphasize for each site. For instance, they picked the trait of attractiveness for a dating site and professionalism for a career site.

However — and somewhat unexpectedly — the crowdsourced responses tended to favor the profile photos that were chosen by strangers rather than those chosen by the people themselves.

"People were relatively poor at making these choices [for themselves]," White said. "And that limited the positive impressions they made online."

But why are strangers better at this task?

It's not entirely clear, but one idea is that people tend to perceive themselves more positively than others do. This may interfere with their ability to discriminate when trying to select a photo that gives a positive impression, White said.

Another idea is that strangers are better at choosing "authentic" images that capture a person's current appearance than are the people themselves, White found in a 2015 study published in the British Journal of Psychology.

"It seems we're bad at discriminating between images of our own face," White said. "We suspect this is because our face is overly familiar to us. This familiarity seems to make it harder to choose the specific shot that best portrays us." [7 Unexpected Ways Facebook Is Good for You]

Moreover, it appears that people overemphasize the trait of attractiveness compared with other traits, such as trustworthiness and approachability, despite the potential benefits that these traits might have on these sites, he said.

Still, there are a number of lingering questions to be answered. "We have not yet begun to examine the factors that predict which photo will be selected, or which photos make good profile images," White said.

He did, however, have these words of advice: "If you want to put your best face forward, you should ask someone else to choose your next profile picture."

The study was published online today (April 14) in the journal Cognitive Research: Principles and Implications.